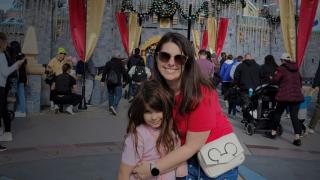 By
Allison Leanos
Patient Care
What started as lower abdominal pains in January 2021 that would strike suddenly, like labor pains, eventually escalated to unintended weight loss, loss of appetite, blood in the stool and frequent vomiting for Melissa Ursini, 37, of Santa Clarita, California. During this time, it never occurred to Ursini that she could have cancer. “I thought I had a food allergy or a ‘women’s health’ issue,” she recalls.
Ursini sought help from a gynecologist and gastroenterologist; following a Pap smear, bladder ultrasound and bloodwork, both physicians deemed her healthy and sent her home. Her symptoms continued to escalate over six months in which she became a frequent flyer in the emergency room near her home. On separate occasions, ER doctors suggested Ursini might have a parasite or an STD, prescribed antibiotics and sent her home.
Finally, Ursini began vomiting fecal matter, and her brother-in-law, an emergency room nurse, convinced her to make the trek to his ER, an hour away from her home. After an abdominal/pelvic computed tomography scan with contrast, it was discovered that Ursini had an obstruction in her left descending colon — this complete blockage was what was causing her to vomit. “The doctor in the ER said I had a mass, and it was obstructing my colon, but I didn’t hear the ‘mass’ part, I only heard ‘obstruction.’ I thought something got stuck,” Ursini said.
Exhausted from feeling ill for so long, she had to hear a couple of times from the ER doctor that the mass in her colon likely was cancer before it registered. She was stunned.
Melissa Ursini
Ursini was admitted to the hospital to undergo a colonoscopy so a surgeon could remove a sample of the tumor for testing. A couple of days later, she underwent surgery that removed the tumor, 7 inches of her colon and 53 surrounding lymph nodes. Shortly afterward, she received the verdict: She had low-grade, Stage 2 colon cancer — T3N0, to be exact. All 53 lymph nodes tested negative.
The hospital also ran genetic testing on the tumor, but zero genetic markers were present, despite that fact that Ursini’s grandfather had died from colon cancer in his 50s.

After receiving her cancer diagnosis at her brother-in-law’s hospital, she decided on City of Hope for further treatment in July 2021. “I met with oncologists at other hospitals, but it was how Dr. Fakih and the nurses at City of Hope made me feel — they were so friendly, they instantly made me feel comfortable,” she said. Moreover, Marwan G. Fakih, M.D., “was very optimistic about my prognosis and top-of-his-game in colon cancer treatment.”
“We [my husband and I] wanted an oncologist who was very knowledgeable about colon cancer who could ensure that I would live a long, happy life past age 37,” Ursini said — while acknowledging that that was a statement she never expected to make at her young age.
Marwan G. Fakih, M.D.
Considering Ursini’s stage of cancer, and given recent clinical data supporting equal benefit from three months versus six months of chemotherapy, Fakih recommended a treatment plan that consisted of three months of chemotherapy infusions with Oxaliplatin, plus the chemotherapy pill Xeloda. Ursini was to receive her chemotherapy infusion once every three weeks, followed by two weeks of daily chemo pills, over the course of three months. This plan would also minimize side effects and make it easier for Ursini to continue working while undergoing treatment. “If I was in your position, this is what I would do,” Fakih assured her. Fakih is the Judy & Bernard Briskin Distinguished Director of Clinical Research at City of Hope.

City of Hope’s community practice site in Santa Clarita was another big motivator for Ursini in choosing City of Hope. This meant that she could continue working remotely at her new dream job and receive her chemotherapy infusions without a big disruption to her day. City of Hope | Santa Clarita was only a five-minute drive from her house. While Fakih developed Ursini’s treatment plan, it was George Hajjar, M.D., at the Santa Clarita clinic who became her primary oncologist during treatment. “Melissa was very involved with her treatment and managed her expected side effects with a smile on her face,” Hajjar said. “The staff in the Santa Clarita office misses her humor and courage very much.”
George Hajjar, M.D.
Ursini’s colon cancer diagnosis at the age of 37 raises some questions. What is causing the rise of colon cancer in young people? And what can young people do when they experience symptoms? According to the National Cancer Institute, colorectal cancer is the leading cause of cancer death in people under 50 in the United States.
“It’s likely a combination of genes and environment. There must be some genes that we simply don’t know about yet — we see patients where the known gene mutations are not there,” said Andreas M. Kaiser, M.D., clinical professor and chief of the Divisin of Colorectal Surgery at City of Hope. City of Hope experts have thoughts about this trend.

A Message for Others

When asked if she could get one message across, Ursini said, “I wish experts could normalize and educate young people, especially women, about getting colonoscopies. When I was experiencing symptoms, I never once thought about a colonoscopy — I had very little education on ‘red flags’ that would warrant one.”
Ursini rang the chemo survivor’s bell in October 2021 and is nearly six months past her treatment. She’ll continue to receive bloodwork and scans every six months at City of Hope. But for now, after receiving a positive prognosis, she’s looking forward to enjoying a long, happy life as a now 38-year-old with her husband Dominick, daughter Regan, 7, and corgi Dodger.