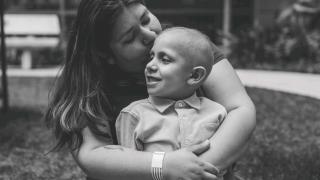 By
Letisia Marquez
Patient Care
It is understandably difficult for Ashley Montañez to talk about the moment a doctor told her Joseph, her only son, a kindergartner and only 6 years old at the time, had cancer. She wipes tears away as she remembers the first time she heard her son had been diagnosed with acute myeloid leukemia.
“My world stopped,” Montañez, 27, of Bakersfield, said. “I couldn't process it. Thank God my husband was there with me, because I couldn't think. My one son, my one baby, has cancer, and there's nothing I can do to help him other than to be there for him. It was the worst feeling in the world.”
A few weeks earlier, Joseph’s stomach was hurting, so Montañez took him to the emergency room. Doctors told her it was constipation. The pain diminished, but then returned. Montanez took him to a different hospital. Doctors there told her he had intestinal intussusception, similar to a bowel obstruction. He was treated for that at a children’s hospital in the Central Valley. But the pain returned.  After further tests, the family received the cancer diagnosis on Jan. 19, 2019.
Joseph endured two rounds of chemotherapy. He lost his hair and weighed as little as 44 pounds at one point. By May, he was still hospitalized. His cancer was not in remission.
Nicole A. Karras, M.D.
Nicole A. Karras, M.D., Joseph’s doctor and City of Hope pediatric oncologist, said Joseph’s disease was severe, as it was not responding to chemotherapy. Joseph needed a bone marrow transplant to put his cancer in remission.
“After his second round of chemo, his hair is falling out, and his lips are chapped,” Montañez said. "And he asks me: ‘Why is this happening to me?’ I just told him. ‘You know, there's no explanation for why this is happening. But you're strong. God is with us. We're gonna get through this. You're a strong little boy, Joseph, and you can fight.’"
To her surprise, the next day, Joseph woke up and had regained his energy and enthusiasm.
“He was just a bright ball of sunshine again,” she said. “Even when he was sick and he was constantly having to get IV medications to bring his fever down, he didn't cry. He didn't make a big fuss about it.”
“He always had this light to him,” Montañez said, adding that Joseph often comforted her when she was sad.
Joseph arrived at City of Hope in June 2019 to prepare for his transplant.
“Joseph was super chatty and enjoyed telling stories to the team,” Karras said. “He was pretty energetic, considering everything he was going through.”
Shortly before his transplant, the family would suffer another hardship. Ashley Montanez’s mother passed away.
“I had to leave Joseph for a few days in the hospital to go to my mother’s funeral,” Montañez said.
Montañez knew Joseph would need a donor, and she started telling family members they would need to get their cheek swabbed or donate a small blood sample to find out if they could be a donor for Joseph.
But Karras had some welcome news for Montañez — Be The Match had found a perfect match for Joseph, and the person had agreed to donate bone marrow to Joseph.
Vanessa Flores
At around the same time, Vanessa Flores, 43, was working as a Wells Fargo bank teller near El Paso, Texas when she started receiving calls from Be The Match, the world’s largest and most diverse bone marrow registry. She did not call the organization back immediately, as she didn’t remember that she had signed up for the registry 18 years ago at a company blood drive.
But after a few phone calls and a letter, she called back.
A Be The Match representative explained to her that they needed her to donate her bone marrow to save a leukemia patient.
“I didn't hesitate. I said yes right away,” she said. Flores, who lives in Santa Teresa, New Mexico, had a lot of questions about the donation process, but she didn’t let that stop her.
The donation process for people who donate bone marrow to children with cancer is a bit different than those who donate stem cells for a bone marrow transplant for adults. Flores traveled to Washington, D.C. with her son, Nathan, to have her bone marrow collected. (Flores said they told her she needed to travel to Washington, D.C., as her bone marrow was needed urgently and there were no centers available in her area to do it quickly.)
Throughout that process, Flores only knew that it was a 7-year-old boy with leukemia who would receive her bone marrow. She later found out he was doing well. Although Flores thought about the boy and his family a lot, and prayed for his recovery, that is all she knew about the boy for more than a year.
On Friday, Oct. 16, the public will be able to watch Joseph and Flores’ virtual meeting for the first time as part of City of Hope's 44th annual Bone Marrow Transplant Reunion. Follow City of Hope’s Facebook channel to watch a video of Joseph and Flores’ emotional reunion.
City of Hope has held a celebration for bone marrow transplant recipients and their donors for more than four decades, but due to the COVID-19 pandemic, this year’s reunion is virtual.
The virtual event will also bring together thousands of bone marrow transplant patients and their families to celebrate a second chance of life in a unique and inspiring way. What began with a birthday cake and a single candle representing a patient’s first year free from cancer has grown into an annual extravaganza that draws survivors, donors and families from around the world, as well as the doctors, nurses and staff who help them through the lifesaving therapy.
To sign up to join the bone marrow registry, visit Be The Match.