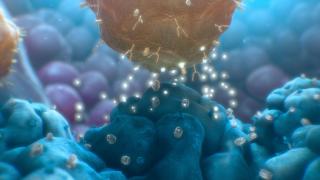 By
Jenny Peters
Patient Care
Early testing, accurate diagnostics and decisive action are important elements in the fight against lung cancer. At City of Hope, the recent addition of a new leading-edge robotic bronchoscopy system is helping the thoracic team accomplish all three.

In Lilly Madrid's case, this game-changing new tool helped bring her case to a happy conclusion.
Madrid, a healthy 60-year-old nonsmoker who lives in the high desert, was first alerted to an issue with her lungs three years ago. A scan for a possible blood clot incidentally discovered a small nodule in one of her lungs.
Three months later, she returned for another scan, which showed the spot was growing.
"They said I needed to see a pulmonologist," Madrid said. "But the pulmonologist in my area said they couldn't see me for five months — a ridiculous amount of time! I thought, 'Oh, my gosh, by then I'll be gone.’"
That was when she took her health into her own hands and referred herself to City of Hope.
Madrid met with Anna Kim, M.D., a lung cancer specialist and assistant clinical professor in the Division of Pulmonary and Critical Care Medicine. Together they made a plan.
Anna Kim, M.D.
"She presented with a small lung nodule that was in a tricky location, fairly close to the left heart border," Kim said. "So we chose to do another CT scan in a couple of months, to see how it behaved, and there was no change. She was asymptomatic at the time, so we chose to follow her radiographically. I've been seeing her an average of twice a year, with scans each time. In August this year, her scan showed something that appeared to be a little bit different than what I had seen previously."

One of the advantages of receiving care at a National Cancer Institute-designated comprehensive cancer center like City of Hope is the sheer abundance of available expertise.
"At City of Hope, we have what you could call 'one-stop shopping,' with all the different disciplines and specialists right here,” Kim explained. “We have discussions about each case with doctors who have specific experience."
Fortunately for Madrid, the cancer center had recently added Thomas Waddington, M.D., an interventional pulmonologist. Kim reviewed Madrid's case with him, particularly the problematic location of the growth, to see if he could use City of Hope's new robotic-assisted bronchoscopy technology to achieve a safe biopsy.
Thomas Waddington, M.D.
"As an interventional pulmonologist, this technology allows me to get to places in the lung I could never get to before," said Waddington, a lung specialist and also an assistant clinical professor in the Division of Pulmonary and Critical Care Medicine.
"In Lilly's case, it was so close to the heart — and the heart's beating, and the lungs are breathing, one moving one way and one the other — it would have been impossible to do a biopsy the old way, with a traditional bronchoscope," Waddington continued. "Having this new technique this year has completely changed the way I think about what we're going to be able to accomplish in the future."
The new robotic bronchoscope — known as the Monarch robotic bronchoscopy system — possesses several advantages over traditional methods. A regular bronchoscope can bend, but only in one direction, while the new Monarch bronchoscope is much more flexible and smaller, allowing it to make turns inside ever-smaller and ever-narrower segments of the lungs. And, it knows how to use GPS. A CT scan creates a 3D map of a patient’s lung that the robotic bronchoscope can follow.

A Rare Form of Lung Cancer

Jae Kim, M.D.
For Madrid, the good news was that the robotic bronchoscope reached her growth and was able to safely get a biopsy. The bad news: the biopsy showed that Madrid did indeed have Stage 1 lung cancer, and one of the rarest forms, known as a carcinoid tumor.
From that diagnosis to surgery was only about a month and a half. That quick action, according to her thoracic surgeon, Jae Kim, M.D., involved using "a completely different robot, one that has multiple arms and uses small instruments to remove the section of the lung where the tumor is and all the lymph nodes nearby as well."
"It's a really important thing for people to realize that a lot of cases of lung cancer happen in people who've never smoked," Kim, also an associate professor in the Department of Surgery and chief of the Division of Thoracic Surgery, added.

Screening Can Make a Huge Difference

"For people who have a significant smoking history, we recommend lung cancer screening to catch those cancers early, while it is still curable. The cure rate for lung cancers caught with lung cancer screenings is over 90%, as opposed to those cancers that show up due to symptoms. The cure rate in those cases is less than 15%."
Testing showed Madrid’s lymph nodes were clear of cancer cells. Today, she has what her surgeon says is "a really very, very good prognosis. She is not scheduled for any additional treatments."
As a wife, mother and grandmother with plenty to live for, she's naturally elated.
“To hear that you have cancer is very frightening,” she said. “My main concern was it spreading. To realize they were able to catch it so early, before it had spread — this was the best outcome I could have imagined.”
"I just can't speak highly enough about City of Hope and the doctors I found there," she added. "I'm so thankful. So very thankful."