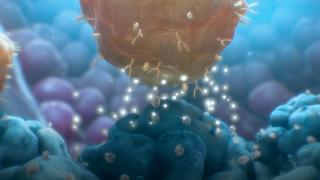 By genetically engineering a tumor-selective oncolytic virus to deliver the surface antigen CD19 for expression on solid tumor cells, investigators at City of Hope have developed an approach to successfully target solid tumors with chimeric antigen receptor (CAR) T cell therapy both in vitro and in vivo in mice.
CAR T cell therapy is a promising immunotherapy that has already been approved by the Food and Drug Administration for the treatment of non-Hodgkin lymphoma and acute lymphoblastic leukemia. However, a number of hurdles have interfered with this therapy’s efficacy against solid tumor cancers. The research of Saul Priceman, Ph.D., senior investigator and assistant professor in the Department of Hematology & Hematopoietic Cell Transplantation, and Anthony Park, Ph.D., lead investigator and postdoctoral fellow, is focused on overcoming these limitations and the team recently published their latest breakthrough in Science Translational Medicine.
CAR T cell therapy works by recognizing and acting as a receptor for a specific antigen on a target cell. Once bound, the target cell is killed in a manner no different than a normal cytotoxic T cell, through T cell mediated cytotoxicity. By genetically engineering T cells to express specific antigen receptors, T cells can kill targets with high precision.
One of the primary barriers that limit the efficacy of CAR T cell therapy is the lack of selectively and homogenously expressed tumor-specific antigens. Another is the immunosuppressive tumor microenvironment.
“Solid tumors are surrounded by a brick wall — a so-called immunosuppressive tumor microenvironment. When a CAR T cell attempts to enter the tumor, survive and kill cancer cells, it can’t effectively because of this barrier,” noted Priceman.

To navigate a new approach to delivering CAR T cell therapy to treat solid tumors, Priceman and Park collaborated with Stephen J. Forman, M.D., director of City of Hope’s Hematologic Malignancies Research Institute, and Yuman Fong, M.D., the Sangiacomo Family Chair in Surgical Oncology at City of Hope, who develops oncolytic viruses for cancer treatment.
Oncolytic viruses have the ability to selectively infect tumor cells, to induce immunogenic cell death and to be genetically engineered to encode transgenes for targeted delivery to tumor cells; because of this, they were an ideal candidate to use as a way to break through the tumor microenvironment and deliver an antigen not normally found on the surface of solid tumor cells for CAR T cells to hone in on. According to Park, “Oncolytic viruses are one of nature’s most destructive pathogens, and we’re using that to our advantage to target cancer rather than using it to cause a disease.”
To start, the team designed a chimeric orthopox oncolytic virus (OVt19) to code for a truncated, nonsignaling variant of human CD19 (CD19t) to determine whether they could elicit surface expression of CD19 on tumor cells. During in vitro experiments conducted in a number of triple-negative cancer lines, the team was able to demonstrate successful expression of CD19t on the tumor cell surfaces.
“We designed this oncolytic virus to do what it does so well,” Fong said. “It entered the cancer cell and used the cell’s own machinery to replicate itself, and it engineered the cancer cells to express a truncated form of the well-known CAR T cell target, CD19.”
The researchers observed nearly 100% CD19t expression on tumor cells after 24 hours at a multiplicity of infection (MOI) of one, and after 72 hours at lower MOIs. At the later timepoint, many of the tumor cells were still alive, indicating a window for CAR T cell therapy to be directed against the new surface marker before virus-mediated tumor lysis occurred.

With successful expression of CD19t on tumor cells, the team moved forward to determine the efficacy of CD19 engineered CAR T cells in cell culture and therapeutic studies in mice. What they saw was a complementary effect.
CD19-specific CAR T cells were not only able to secrete cytokines and target and kill tumor cells, but tumor cell death led to the release of viral particles that were able to infect adjacent tumors. In addition, the investigators saw prolonged anti-tumor immunity in mice that were cured of their cancer with the combination of immunotherapies.
“The immune system built a memory response to the tumor,” Park said. “Once it eradicated tumors, following the initial combination treatment, the mice were shielded against tumor recurrences.”
These findings illustrate a powerful platform to effectively target solid tumors, and the team is planning to expand this research to the clinical development process so it can hopefully be used to treat patients who have solid tumor cancer. Clinical trial design is currently underway, and the team plans to begin a clinical trial in 2022.