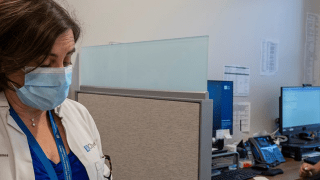 The individual, who was treated for leukemia, is the fourth in the world and the oldest to go into long-term remission of HIV after receiving stem cells from a donor with a rare genetic mutation
By
Letisia Marquez
Patient Care
Innovation
Research
Featured

City of Hope announced July 27 that a 66-year-old man who was diagnosed with HIV in 1988 has been in remission from the virus for over 17 months after stopping antiretroviral therapy (ART) for the disease following a stem cell transplant from an unrelated donor for acute leukemia. Jana K. Dickter, M.D., City of Hope associate clinical professor in the Division of Infectious Diseases, presented the data at the AIDS 2022 press conference. The patient received the transplant nearly 3 1/2 years ago at City of Hope.

The man lived with HIV for over 31 years, the longest of any of the three previous patients with HIV who have gone into remission after receiving a stem cell transplant for a blood cancer and HIV. At 63 years old at the time of his transplant, he is also the oldest patient with HIV and blood cancer to undergo a transplant and achieve remission from both conditions.

Following the development of a form of leukemia more prevalent in those with HIV later in life — acute myelogenous leukemia — the man received the life-saving stem cell transplant in early 2019 from a volunteer stem cell donor who had a rare genetic mutation, the homozygous CCR5 delta 32 mutation, that makes people resistant to most strains of HIV infection. CCR5 is a receptor on CD4+ immune cells, and HIV uses that receptor to enter and attack the immune system. But the CCR5 mutation blocks that pathway, which stops HIV from replicating.

In addition, the patient was able to receive a less intensive pre-transplant chemotherapy regimen that City of Hope and other transplant programs have developed for older and less fit patients prior to transplant. This regimen makes an allogeneic transplant — a transplant from donor cells — possible in order for this patient population to achieve remission from their cancers. While still effective, it is better tolerated by older patients, thus reducing the potential for transplant-related complications.

Under the care of City of Hope hematologist Ahmed Aribi, M.D., assistant professor in the Division of Leukemia, the patient received three different therapies to get him into remission before receiving the transplant. Most patients achieve remission after one therapy. The remission is necessary because a transplant is an intensive procedure that can cause serious complications.

For the transplant, Aribi and his team worked with City of Hope’s Unrelated Donor BMT Program — directed by Monzr M. Al Malki, M.D. — to find a donor who was a perfect match for the patient and had the rare genetic mutation, which is found in just 1-2% of the general population.

The patient did not experience serious medical issues after transplant.

“This patient had a high risk for relapsing from AML [acute myeloid leukemia], making his remission even more remarkable and highlighting how City of Hope provides excellent care treating complicated cases of AML and other blood cancers,” Aribi said.

Since recovering from his transplant, the City of Hope patient has not shown any evidence of having replicating HIV virus in his body, either in blood or tissue samples. With institutional review board approval, he stopped taking ART for HIV in March 2021 and was monitored closely for rebound virus. He might have been able to stop the therapies sooner, but wanted to wait until he was vaccinated against COVID-19. City of Hope is continuing to monitor the patient on an ongoing basis.

“We are proud to have played a part in helping the City of Hope patient reach remission for both HIV and leukemia. It is humbling to know that our pioneering science in bone marrow and stem cell transplants, along with our pursuit of the best precision medicine in cancer, has helped transform this patient’s life,” said Robert Stone, president and CEO of City of Hope and the Helen and Morgan Chu Chief Executive Officer Distinguished Chair. “The entire team at City of Hope is honored to make a difference every day in the lives of people with cancer, diabetes and other life-threatening diseases.”

“We were thrilled to let him know that his HIV is in remission and he no longer needs to take antiretroviral therapy that he had been on for over 30 years,” Dickter said. “He saw many of his friends die from AIDS in the early days of the disease and faced so much stigma when he was diagnosed with HIV in 1988. But now, he can celebrate this medical milestone. We can find no evidence of replicating HIV in his system.”

Dickter went on to say that the ramifications of the patient’s outcome are “profound.”

“Because this patient was the oldest to receive a stem cell transplant [of the four patients], has lived the longest with HIV prior to his transplant, and received the least immunosuppressive therapy, we now have evidence that if the right stem cell donor is found for patients living with HIV who develop blood cancers, we can use newer and less intensive chemotherapy regimen options to try to achieve a dual remission. This may open up whole new opportunities for older patients living with HIV and blood cancer.”

“When I was diagnosed with HIV in 1988, like many others, I thought it was a death sentence,” the man, who wishes to remain anonymous, said. “I never thought I would live to see the day that I no longer have HIV. City of Hope made that possible, and I am beyond grateful.”

A History of Leadership in HIV, Transplant

City of Hope was one of the first centers in the United States to perform effective, curative autologous transplants, which use a person’s own stem cells, for patients with HIV-related lymphoma. When many centers still treated patients with low-intensity, noncurative treatment approaches, City of Hope challenged that paradigm by demonstrating that autologous transplants could be used to cure patients with HIV-related lymphomas who would otherwise die.

City of Hope further pioneered the use of gene-modified blood stem cell transplants to evaluate the use of stem cells engineered to be resistant to HIV infection. The institution was also a primary national co-leader in two National Cancer Institute-sponsored trials for autologous and allogeneic stem cell transplantation, which use a donor’s stem cells, for patients with HIV and blood cancers. These trials led to a change to the national standards of care on how best to manage this vulnerable patient population.

Leveraging their expertise in cellular immunotherapy, City of Hope scientists have also developed chimeric antigen receptor (CAR) T cells that can target and kill HIV-infected cells and control HIV in preclinical research. They are working to start a clinical trial using CAR T cell therapy, which has the potential to provide HIV patients with a lifelong viral suppression without ART.

“The City of Hope patient is another major advancement. It demonstrates that research and clinical care developed and led at City of Hope are changing the meaning of an HIV diagnosis for patients across the United States and the world,” said John Zaia, M.D., Ph.D., director of City of Hope’s Center for Gene Therapy, Aaron D. Miller and Edith Miller Chair for Gene Therapy and a leader in HIV research. “City of Hope remains at the forefront of clinical research that changes people’s lives for the better.”

“We are excited to continue our research on future breakthroughs for people living with HIV,” Dickter said.