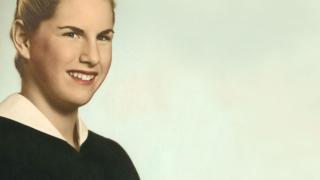 By
City of Hope
News

Bernstein, who joined City of Hope in 2007, was a distinguished pioneer in breast cancer research spanning 40 years. In her decades-long career, her work as a biostatistician and cancer epidemiologist transformed the way researchers, clinicians and others perceive the ability to modify cancer risk.

“Leslie was a pioneer in cancer epidemiology, a mighty advocate for women in science, a mentor to myriad epidemiologists, an inspiring collaborator and a sounding board for students to executives. More than that, she was brilliant, personable, funny, a great communicator and listener, and kind,” said Susan Neuhausen, Ph.D., director of the Division of Biomarkers of Early Detection and Prevention, Department of Population Sciences, and The Morris & Horowitz Families Professor in Cancer Etiology & Outcomes Research at City of Hope. “Leslie was a beloved friend who truly cared about people. She was so proud of her children and grandchildren, who she loved to pieces. She will be sorely missed by me and countless others.”

Bernstein would often share the story of how she chose her career path. It began in 1950, when she was a student at Hughes Junior High in Long Beach, California, and turned in a term paper entitled, “I’m Going to Be a Statistician.” She always said it was baseball that influenced that choice.

“Our family didn’t own a television, so we listened to baseball games on the radio, and I loved hearing about how good a batter was or what a pitcher did, and memorizing batting averages,” she would say. “The announcers would refer to the people crunching all those numbers as ‘the statisticians’ and I thought, ‘I want to be one of those.’”

In that career, she became internationally known for her groundbreaking research in breast and other cancers, hormones and reproductive endocrinology. A one-time competitive swimmer, she garnered global recognition for her revolutionary research study, published in 1994, that identified the link between physical activity and reduced risk of breast cancer. In that same year, Bernstein also helped launch the California Teachers Study, a more than two decades-long seminal study of breast cancer and other diseases in 133,000+ public school professionals. In recent years, hers was the first published study showing that the use of low-dose aspirin reduces the risk of breast cancer in women.

“‘Les’, as we fondly called her, is known by many as the ‘mother’ of cancer epidemiology. I believe her experience as a mother crafted the woman we know as an exceptional scientist, communicator and educator. She worked hard to earn the respect and appreciation she so deserved within the broad field of cancer research,” said Kimlin Tam Ashing, Ph.D., deputy director and professor in the Division of Health Equities, Department of Population Sciences. “She was supremely dedicated to her mentees, always caring and wholly attentive. She imparted her knowledge generously with both rigor and compassion. I always felt that she was fully present with me and cared about my scientific success as well as my whole person, including my family. She will always have a very special place in my heart.”

As the former director of City of Hope’s Division of Cancer Etiology in the Department of Population Sciences and dean of faculty affairs, Bernstein received numerous awards and honors for her incredible work in research and mentorship, including City of Hope’s Lifetime Achievement Mentoring Award. She was also the recipient of the Brinker Award for Scientific Distinction, the Rosalind E. Franklin Award for Women in Science given by the National Cancer Institute, the Abraham Lilienfeld Award for Lifetime Contributions to Epidemiology given by the American College of Epidemiology, the Award for Research Excellence and the Prevent Cancer Foundation Award from the American Association for Cancer Research.

“Leslie Bernstein’s scientific work as a pioneer in breast cancer helped save thousands of lives across the globe. She was an outstanding role model for both women and men in medicine. She was also a generous, giving woman, who cared about others through her deeds as well as her words. We have lost a giant, and I have lost a very dear friend,” said Alexandra Levine, M.D., M.A.C.P., professor in the Department of Hematology & Hematopoietic Cell Transplantation at City of Hope.

Bernstein also received the Medal of Honor from the American Cancer Society for her life’s work to greatly advance public health, public communication and public policy to impact new directions in cancer control. Earlier this year, Bernstein received the 2022 Margaret L. Kripke Legend Award for her significant contributions in advancing and promoting women in cancer medicine and cancer science.

In addition, she was a devoted supporter and philanthropic friend to City of Hope.

Bernstein and her husband Saul, an orthopedic surgeon who died in 2010, had three children, 11 grandchildren and two great-grandchildren.

“Dr. Bernstein was a visionary and scientific leader. She blazed a scientific trail for hundreds of women scientists; she opened doors for all of us,” said Victoria Seewaldt, M.D., Ruth Ziegler Chair in Population Sciences. “Dr. Bernstein was also a humanitarian. She gave her time to everyone. She mentored; she gave people courage to do the things they thought they could not do. A great woman has left us, but her legacy will live on and shine like the stars in heaven.”

You can read more about Bernstein’s incredible life and accomplishments here.