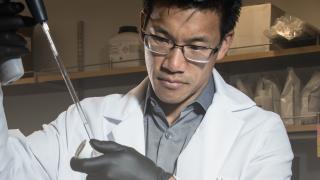 By
Maxine Nunes
CAR T
Pediatric brain tumors are the most common solid tumors in children and the most common cause of childhood death from cancer. While there are effective therapies for some brain tumors, others can be difficult to treat, and for certain aggressive tumors, such as diffuse intrinsic pontine glioma, the median survival rate after diagnosis is between nine and 15 months.
Leo Wang, M.D., Ph.D., a pediatric hematologist-oncologist at City of Hope, is determined to change that. He is principal investigator of a new trial that has just received an $8.4 million grant from the California Institute for Regenerative Medicine to study the use of chimeric antigen receptor (CAR) T cell therapy to treat pediatric brain tumors.
“City of Hope has been a pioneer in developing CAR T cell therapies, and I’m really excited that we can now use this promising therapy for these children,” he said.
The Phase 1 trial is open to patients between the ages of 4 and 25 whose brain tumors express interleukin-13 receptor subunit alpha-2 (IL-13Ra2), an antigen found in about half of all pediatric brain tumors.

CAR T cell therapy engineers T cells — in this study, the patient’s own T cells — to fight a specific cancer. Several CAR T cell therapies have already been Food and Drug Administration-approved to treat several types of blood cancers, and the technique is showing significant promise with solid tumors as well. CAR T cell therapy begins with a process calls leukapheresis, which separates and collects white blood cells in order to harvest T cells. These T cells are engineered to recognize the tumor antigen (in this case, IL-13Ra2) and then grown in the lab to allow them to multiply. After a rigorous manufacturing and quality-control process, the cells are painstakingly prepared for delivery to patients, who then receive CAR T cell infusions.
In blood cancers, CAR T cell therapy is most effective when the patient is first given lymphodepleting chemotherapy. This technique decreases the number of white blood cells in the blood, which provides more space for the CAR T cells to expand. City of Hope’s trial will be among the first to test this procedure in pediatric brain tumors, but because this is a new therapy for children, the first three trial subjects will receive only CAR T cell treatments. Starting with the fourth patient, lymphodepleting chemotherapy will also be used.
The trial will also use an innovative delivery method pioneered by Christine Brown, Ph.D., deputy director of the T Cell Therapeutics Research Laboratory at City of Hope and The Heritage Provider Network Professor in Immunotherapy, and Behnam Badie, M.D., neurosurgeon, director of City of Hope’s Brain Tumor Program and The Heritage Provider Network Professor in in Gene Therapy. The trial is designed for patients to receive up to four infusions.
“CAR T cell therapy is usually given intravenously, and then the cells travel through the bloodstream to find the tumor. But the blood-brain barrier separates the blood circulation from the central nervous system — which makes it hard for CAR T cells to access the brain,” Wang explained. “In this trial, we introduce the CAR T cells directly into the ventricles of the brain, which works much more effectively for brain tumors. In fact, many other institutions have started to adopt this method as well.”

Wang began working at City of Hope in 2016 with the hope that its CAR T cell program could develop a trial for pediatric brain cancers. Now it is finally underway, thanks to a team that’s dedicated to its success.
“An amazing group of people has been working tirelessly to make this trial happen — scientists, health care providers, managers, regulatory and operational staff, people who find funding” said Wang. “I’ve been tremendously privileged to be included in this, and it’s an honor every day to be a part of it.”
If you would like to inquire about enrollment in the trial, call 833-582-HOPE (833-582-4673) or email pediatrictrials@coh.org for more information.
Required*