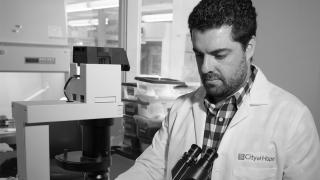 Saul Priceman, Ph.D., is walking toward his research lab to check on some cells â microscopic, seemingly unassuming cells that hold tremendous power. They are part of a major advance in cancer therapy called immunotherapy.

âWe are developing potentially groundbreaking therapies for patients with advanced cancer,â said Priceman, whose lab has engineered hundreds of CAR (chimeric antigen receptor) T cells, using a patientâs own immune system, to fight blood cancers like leukemia and lymphoma, and solid tumors like brain cancer. Soon, they will be in clinical trials, testing CAR T cells for several other advanced solid tumor types in a concerted effort to treat any cancer patient with this type of immunotherapy.

âPatients who have no other options come to City of Hope for something that may potentially transform the trajectory of their disease, and thatâs what weâre doing with immunotherapy.â

Priceman has something in common with CARs. He, too, seems unassuming. His office uniform is jeans, tennis shoes and an untucked collared shirt. He spends a lot of time trying to tame the mass of dark curls on his head. And he tends to punctuate technical scientific conversations with a muted, âCool.â

âIâm pretty sure all my friends think I just do nothing all day because they all say, âYouâre trying to cure cancer but you havenât yet, so what are you doing â what are you doing?ââ said Priceman, laughing.

But what he is doing in his lab â like the CARs â is powerful.

Priceman is a lead member of the City of Hope T cell immunotherapy program, whose painstaking work over the past several years includes extracting T cells, natural disease fighters in the human immune system, from patients and inserting CARs into them. Each CAR is attuned to a specific cancer and, in some cases, to the way a patientâs specific tumor behaves.

Once CARs are introduced into the T cells, they produce a protein that is later expressed on the cellâs surface. This protein allows T cells to recognize, bind to and destroy cancer cells all over the body.

Priceman is an assistant research professor at City of Hope. He and his colleagues have two CAR T clinical trials starting soon, including one focused on women whose HER-2-driven breast cancer has migrated to the brain, and another on men with advanced prostate cancer.

âThereâs very limited therapy options for these patients,â said Priceman. âWhat weâre trying to do is find a potent and durable option for them, to increase their lifespan and overall quality of life.â

Priceman walks in and greets one of the researchers in the lab.

The two scientists then begin an animated conversation about how well a line of CAR T cells is performing against ovarian cancer cells. By the time the conversation ends, Priceman and his colleague have hashed out several strategies for optimizing the process.

It takes someone with Pricemanâs disposition â at turns serious and incisive, at others funny and lighthearted â to handle the failures inherent in science.

âYou have to basically be able to be beat up most of every day, because it's like 95 percent failure,â he said. âHalf of the time with the researchers and scientists in our group, it's like, âThis didn't work. What are we going to do?ââ

That type of question hovers over the CAR T cell studies in his lab. For months on end, doing preclinical work for the prostate cancer trial, Priceman and his colleagues would peer into microscopes and fill test tubes, only to find they had made no progress on the therapies.

âBut thatâs the fun because you troubleshoot,â said Priceman. âSoon, you have one glimmer of hope, and then another one, and at the end of it, youâve ultimately developed a therapy that might directly impact prostate cancer patients or whatever cancer you're focusing on.â

You could trace Pricemanâs determination for transforming T cells into cancer fighters, curiously, to a study involving fruit flies. He went to University of California Santa Barbara for his undergraduate education, majoring in microbiology and genetics studies and volunteering in a lab that did research on fruit fly genetics.

âBecause their lifespan was so short, you could understand concepts very quickly in terms of their genetics, and the impact of specific genetic mutations in such a short life span, and try to relate it to human genetics,â said Priceman. âAt that point, I thought I wanted to get a medical degree because I thought thatâs what you to do in the medical field. I didnât know about translational research.â

Once he graduated, Priceman began working in a laboratory at Amgen, a major biopharmaceutical company in Thousand Oaks, California. He was hired to work in a department that focused on understanding a therapyâs âpharmacodynamics,â or how a drug functions in a personâs body.

âI worked with a cancer drug, and it was mind blowing,â he said. âWe worked with early phase clinical trials, trying to understand how they worked and how we could improve them in the long run. It was super interesting.â

âI realized during that experience that I had to get a Ph.D., so I left after three years at Amgen and went to UCLA. I wanted to create the therapies that would ultimately cure patients. That was what excited me.â

At the university, Priceman became intrigued by a concept that few other researchers at the time were following â how a personâs immune system can be used to fight cancer.

âIt was a niche and not much focused research was being pursued in that area at UCLA at that time,â said Priceman. âImmunotherapy for cancer is in the news a lot now, but back then, it wasnât. So, itâs been exciting to see how much the field has grown.â

He decided to pursue a Ph.D. in tumor immunology and complete his postdoctoral fellowship at an institution where immunotherapy research was a priority.

That place was City of Hope.

Priceman came to City of Hope to work in a lab headed by Hua Yu, Ph.D., the Billy and Audrey L. Wilder Professor in Tumor Immunotherapy. The lab focused on STAT3, a protein that drives cancer growth and regulates the immune system in cancer patients. In addition to cancer, Priceman also did preclinical research on how STAT3 could drive type 2 diabetes.

Because of his experience working with T cells during his postdoctoral fellowship, Priceman joined the faculty in City of Hopeâs T cell immunotherapy program in late 2013.

CAR T cells have worked so effectively for blood cancers, explained Priceman, because they encounter tumors almost immediately once infused into a patient. With solid tumors, however, whatâs known as an "immunosuppressive microenvironment" is a major barrier to T cells.

âA lot of solid tumors have essentially not only shut down the immune system but theyâve also co-opted it to work in their favor,â Priceman added. âSo even if you make a CAR T cell thatâs really effective and you intravenously inject it into a patient, itâs a hard feat for the T cell to get to the solid tumor mass and kill cancer cells once inside the tumor because of the local immunosuppressive microenvironment.â

âSo, a lot of the work in my group is to build a CAR that will allow them to be more potent and survive for longer periods of time in this harsh microenvironment,â he said.

âIt is arguably the earliest and most exciting thing we see.â

Priceman is back in the lab, leaning against the research bench, describing how it will feel to get the first tumor tissue samples back from patients enrolled in the metastatic HER-2 breast cancer trial.

The patients will have different health histories and span different ages, but they will have one thing in common â all will have tried multiple therapies to fight breast cancer, and their disease will have come back with a vengeance, attacking their brain.

Normally, metastatic breast cancer means few options and only a few months of life. But Priceman and his colleagues believe their diminutive CARs may help extend these womenâs lives.

âOur hope is that immunotherapy will provide a true option for patients who otherwise have exhausted other treatment strategies,â he said.

During the trial, each patient will have her tumor assessed by researchers so that CARs designed to attack her specific cancer can be produced and multiplied. Later, millions of CARs will be infused directly into her brain to target the HER-2-driven cells multiplying there.

After the CAR T cells are infused, clinicians and researchers like Priceman will wait to see if the cells did their job.

âSamples or resections of the patientâs tumor will come to our lab and we get to find out what happened to the CAR T cells. Where did they go? Did they stick around? Did they get into the tumor and wreak havoc on those tumor cells? And did we improve the anti-tumor immunity in the patient?â

The implications of success for the trials are difficult to overstate, said Priceman.

âWhen we infuse those CAR T cells into the patient for the first time, targeting the protein that's overexpressed on those breast and prostate cancer cells, we will be the first, I think, in the world.â