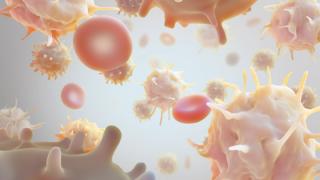 By
Malcolm Bedell
Education
Saul Priceman, Ph.D.
Traditional cancer treatments, including chemotherapy and radiation treatment, work in part by shutting down the “pathways” that cancer cells take as they proliferate and divide. But what if, rather than closing these pathways, we could train our own immune system to recognize and battle cancer on its own?
That’s one of the potential promises of the field of cancer research called “immunotherapy,” which describes treatments that use certain parts of the body’s own defenses to help fight cancer. Immunotherapies take a few different forms. Typically, immunotherapy can be categorized into treatments that either stimulate an existing immune response to help it work harder to attack cancer cells, or by introducing additional immune system cells and proteins to “jump start” the immune system, make it recognize cancer cells, and attack those cells accordingly.
Saul Priceman, Ph.D., is an assistant professor in the Department of Hematology & Hematopoietic Cell Transplantation at City of Hope, and a trained tumor immunologist with expertise in T cell biology and cancer immunotherapy. We asked him to walk us through an overview of immunotherapy, and the ways in which it continues to lead to innovations in cancer treatment.

How the Immune System Responds to Cancer Differently

What Can Immunotherapies Do to Help?

To help the immune system along, doctors turn to two broad categories of immunotherapy, used to either improve an immune system response or initiate one: checkpoint inhibitors and adoptive cell therapies.
“Checkpoint inhibitors revert the suppression that happens inside the immune system of the patient, effectively ‘releasing the brakes’ on the immune response,” Priceman said. “This treatment is used when there’s already a response from the immune system, but for some reason, that response is being shut off. In other words, the ‘brakes’ are being applied. Checkpoint inhibitors release those brakes.”
Adoptive cell therapies are used when there is no response from the body’s immune system, and “there’s no brake to be released,” said Priceman. “The car’s not moving. With these treatments, our goal is to ‘spark’ an immune response. We achieve this by providing cells or drugs that will encourage the immune system to target the cancer.”
Hear scientist Saul Priceman, Ph.D., explain CAR-T cell therapy.
CAR T cell therapy is one promising type of this emerging immunotherapy approach. T cells help organize the immune response in the body and kill cells infected by pathogens. These T cells are extracted from the patient and genetically modified to produce receptors called chimeric antigen receptors (or CARs), which allow the T cells to recognize and attach to a specific protein, or antigen, on tumor cells. These engineered T cells are multiplied by hundreds of millions in the lab before being infused back into the patient, where they multiply further and kill cancer cells with that specific antigen. “For blood cancers, like certain types of leukemia and lymphoma, CAR T cell therapy has resulted in unprecedented durable responses, even in patients with very late-stage disease that is highly refractory to other treatments.”
Unlike treatments like chemotherapy and radiation, immunotherapy tries to “teach” the immune system to recognize cancer, and adapt to fight it effectively.
“Chemotherapy works by preventing the cancer cell from proliferating and dividing,” explained Priceman. “But cancer cells are sneaky. They’ll find different ways to continue proliferating and dividing, and suddenly, that chemotherapy treatment that was previously successful no longer works. Rather than target the cancer cell pathways directly, immunotherapy’s goal is to teach other cells in the body to recognize and fight cancer cells.”
This kind of “immune system education” could potentially mean that our bodies could “learn” to recognize and fight cancer on their own. “Our hope is that if you can teach the immune system to evolve, that evolution should be able to outpace the evolution of the cancer cells,” Priceman said. “Eventually, we hope that when a cancer cell uses a new mechanism for proliferation, the immune system recognizes that new mechanism and responds accordingly.”

Immunotherapies Can Include Negative Side Effects

In general, the potential side effects of some immunotherapies are less harsh than those that accompany chemotherapy or radiation treatment, often allowing patients to continue their regular day-to-day routines. However, sometimes immunotherapy patients find that their immune systems become overstimulated, which can lead to complications. “If you spark an immune response, sometimes you can’t control it,” said Priceman. “This can lead to autoimmune disease, susceptibility to certain infections, or even death, in instances where you’ve unleashed the power of the immune system with no control mechanisms. You’ve released the brake, but you can’t control the acceleration.”
Other, more common side effects, which can include diarrhea, flu-like symptoms or fatigue, can often be regulated by doctors, either through an adjustment in medication or the addition of other medicines that can help patients continue their immunotherapy treatments.

The Future of Immunotherapy

As research in immunotherapy continues, new treatment possibilities continue to emerge. One of the first priorities is determining if certain types of cancers have immune system checkpoints that haven’t been identified.
“Checkpoint inhibitors generally don’t work for prostate cancer or pancreatic cancer, possibly because there’s a ‘brake’ that we simply haven’t identified yet,” said Priceman. “We consider these types of cancers ‘immunologically cold,’ which means they typically don’t initiate a response from the immune system, so there’s no checkpoint inhibiting to be done. But even the cancers that we think of as immunologically cold may in fact be triggering brakes that we just haven’t identified yet.” Identifying these checkpoints, combined with potentially starting immunotherapy earlier in treatment, may lead to additional breakthroughs.
“Immunotherapy is still a late-stage strategy,” Priceman explained.
“We’re still trying to evaluate what the earliest responses to cancer are in the immune system. There are trials where immunotherapy is combined earlier in treatment with traditional chemotherapy or radiation, to make it more of a first-line therapy, and those have been encouraging. In the shorter term, we’re trying to get better responses to immunotherapy in solid tumors, such as prostate and breast cancer. That’s our biggest challenge right now. With the successes we’ve seen for blood cancers with CAR T cell immunotherapy, we believe we can achieve similar outcomes for intractable solid tumors.”
Researchers are also considering whether immunotherapy may be ultimately used to achieve an even greater goal: a vaccine.
“The ultimate goal is to use immunotherapy as a prophylactic, not to try to stop cancer, but to prevent it from ever occurring in the first place,” said Priceman. “We’d love to eventually see a true vaccine that gets administered to babies alongside rubella and measles that prevents cancer from ever occurring. At present, we are a long way away from that.”