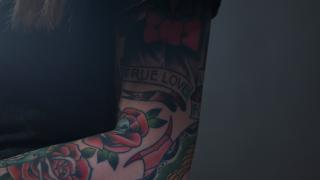 By
Dory Benford
Patient Care
In 2017, Shalone Javier, a mother of five, found a small dark mark on her left thigh. The spot appeared out of nowhere, which concerned her, so she went to her primary care physician to have it checked out. Her doctor recommended that she see a dermatologist, which she did, but despite her concerns, the dermatologist assured her that the spot was nothing to worry about and sent her on her way.
Shalone Javier's melanoma was initially misdiagnosed
Javier went home and tried to ignore the sneaking suspicion that something wasn’t right. But despite the dermatologist’s assurances, the spot on her leg wasn’t going away — it was growing.
“Over time, this spot that used to be tiny and flush with my skin started growing and turning black. It got so big that even when I wore pants, you could see the bump through my clothes,” Javier recalled.
By December 2019, the bump on her leg had become impossible to ignore. Although she was told repeatedly that nothing was wrong, Javier knew instinctively that something was amiss, so she went back to the doctor. This time she saw a new primary care physician, and when Javier showed the physician her leg, the doctor was shocked.
“Her eyes just got big. She was speechless. She didn’t even say a word to me, she just darted out of the room,” Javier said.
“When she came back, she asked me how long I’d had this bump on my leg. I told her two years and she was alarmed. She immediately referred me to a specialist.”
Javier was hopeful that seeing a specialist would finally lead her to the answers she was looking for: What is this bump and how do I get rid of it?
Unfortunately, she was only met with more frustration.
“I am heavily tattooed, and when I met with the specialist, she told me that it was probably just a reaction to the ink, but I knew that wasn’t it. The bump on my leg was in a place with a tattoo I’ve had for over 10 years,” Javier said.
“Why would I suddenly have a reaction to the ink after a decade? I have been a heavily tattooed woman since I was 18 years old. I know what’s normal and what’s not for my body. I strongly believe that I was judged based on my appearance.”

After years of being told the lump on her thigh was nothing, doctors finally did a biopsy, which revealed that Javier had Stage 3 C nodular melanoma.
Melanoma is a type of skin cancer that occurs when the skin’s melanocytes (pigment-producing cells) begin to grow uncontrollably. While less common than other types of skin cancer, melanoma can be more dangerous, as it is more likely to spread. Nodular melanoma is the most aggressive type of melanoma, accounting for up to 15% of all cases. Rates of melanoma have been increasing, and while your melanoma risk increases the older you get, it’s also become one of the most common cancers in young adults.
The best way to lower your risk of melanoma is to limit your sun exposure. People of all ages and skin colors can develop melanoma, so it’s important to use a broad-spectrum sunscreen with an SPF of at least 30. Sun-protective clothing, hats and sunglasses can also help protect skin from UV radiation.
While Javier now had clarity about her condition, she was still having trouble getting the care she needed.
“I requested a PET scan and I was denied. I requested a BRAF [test] and I was denied. I requested a brain scan and I was denied,” Javier said.
“They ended up doing one lymph node biopsy and one CT scan. Then I had surgery.”
The surgery removed a large portion of Javier’s thigh. Skin, tissue and muscle reaching all the way to the bone were cut out, leaving an indentation on her leg. During the procedure, surgeons also did a lymph node dissection to see if Javier’s cancer had spread. Six weeks after the procedure, she learned that it had.
“When I asked what the next steps were after surgery, my doctor told me there was nothing more they could do,” Javier said.
But she refused to give up. Javier knew that seeking care at a comprehensive cancer center was her best chance at survival. She had grown up hearing about City of Hope and knew it had a great reputation for compassionate care — which she desperately needed.
Javier, unafraid to advocate for herself after years of feeling dismissed, secured a referral to City of Hope from her doctor. After several back-and-forths with her insurance company, and the assistance of a financial counselor from City of Hope, Javier was finally cleared to begin treatment at the hospital’s main campus in Duarte.

“My first appointment at City of Hope was amazing. When my doctor asked to look at my leg, I was shocked because for months I had been asking for my leg to be examined after my surgery, and no one would take the time to do a proper exam,” Javier said.
Everything moved quickly after that. Javier began immunotherapy treatments less than a week after her first appointment and for the first time in a long time, she felt like her case was being taken seriously.
Javier did experience a few side effects from the treatment, including hair loss, issues with taste and smell, and fatigue. She also developed a rash, which she initially tried to hide from her care team.
“My nurse actually noticed my rash and asked me about it. I wasn’t going to say anything to anyone. I didn’t want to bring it up only to be ignored, which had been my experience over and over again,” Javier recalled.
“My nurse made me feel comfortable and let me know I could always share any issues I was having with her. Her kindness was the complete opposite of how I was treated before. I feel like City of Hope is the first hospital that took me seriously and didn’t treat me differently because of how I look.”
Javier fought through the side effects and ended up completing a full year of immunotherapy treatments, after which she finally received some good news: she has no active cancer in her body.
Now, after all of the challenges and setbacks she faced on her cancer journey, Javier is feeling better than ever.
“This whole journey has really humbled me. It changed me as a person. I used to be angry all the time because of things that happened in my past. Going through all I went through, I used that anger to fight my cancer with everything I had in me,” Javier said.
“Now, there’s nothing on this Earth that can bring me down, because the worst thing in the world already tried to bring me down and it couldn’t.”