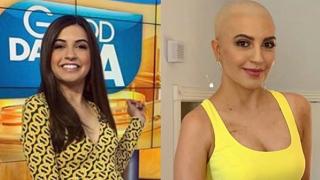 By
Wayne Lewis
Rose Parade
Amanda Salas, entertainment anchor for FOX11’s Good Day L.A. morning show, was in the midst of a banner year for her career, but there were signs that something wasn’t quite right with her health. Persisting through four misdiagnoses, she eventually that she faced a rare form of non-Hodgkin’s lymphoma.
She enlisted City of Hope’s help in the fight, with treatment led by Alex Herrera, M.D., assistant professor of hematology & hematopoietic cell transplantation. An aggressive plan called for six rounds of chemotherapy delivered nonstop five days at a time — and led to remission. In the name of awareness, Salas fought the battle of her life in the public eye, and continues her advocacy to this day.
Salas shares her story as she looks forward to bearing the standard of hope for patients like her as a part of City of Hope’s delegation at the 2022 Rose Parade.
What were your main concerns when you were first diagnosed?
The three questions I asked were: Will I lose my hair? Will I be able to go back to work? And will I be able to have children? All three answers were yes. So two out of three ain’t  bad. Anyway, having a bald head in the L.A. summer turned out to be a perk for keeping cool.
Why did you seek treatment at City of Hope?
I didn’t choose City of Hope; City of Hope chose me. I was at a different hospital, and the oncologist said, “Now, can I treat you for this? Yes. Do I think you’d be in better hands going to City of Hope? Yes.”
When I walked into City of Hope the first day, I knew I was in the right place. There were people from all backgrounds, all walks of life, all ages. You’re sitting in the waiting room next to someone and you just know, you’re all in this battle together.
Who has made a particularly big difference in your treatment?
Hands down, the nurses. When I was at Helford Clinical Research Hospital, they always made sure I was OK. And Dr. Herrera is a hematology hero; he will forever remain in my heart. I’m standing here talking to you because of Dr. Herrera.
What was it like undergoing five days of continuous chemo?
At first, they had to keep me in the hospital 24 hours a day so I could get chemo for five days. Then they gave me a chemo fanny pack with this machine inside. I had never heard of it! Basically, I would get a shot glass of
Alex Herrera, M.D.
chemo an hour, and the delivery was automated. I was able to do my shopping, go to church, hang out with friends, all while getting my treatment.
It was very convenient, albeit weird. At first, I was so worried. By round six, I was out dancing and going to comedy clubs — this is prepandemic, of course — with my chemo fanny pack, living my life while saving my life.
There were some moments you shared along the way that were so funny, such as the Emmys video at the hospital. What role did humor play in helping you cope?
Humor has helped me cope not only with cancer but also with so many things in Hollywood. You have to have a thick skin to do what I do for a living. You have to be able to laugh it off.
So it’s just kind of ingrained in me. I always joke that lymphoma causes lym-FOMO — “fear of missing out.” The one thing I didn’t want to do was miss out. I couldn’t cover the Emmys that year because I was getting chemo in the hospital. So I had a celebration with the amazing staff by my side.
Do you have a message to others who are facing a similar cancer journey?
There is no right or wrong way to battle cancer. There’s no Emily Post etiquette. Every person has to go through this their own way.
Amanda Salas on set.
When I went back to work, I made a conscious decision not to wear a wig. I had a buzz cut. I wanted to show people that we are enough, that we don’t need to hide our scars — or our progress. I think you can watch somebody like me, who chooses to share their journey, and respect that, but do yours completely differently.
How has your experience changed your perspective on life?
I always cherished family, but it really showed me how much. They go through it right there with you. And they were always of service to me.
It’s made me look at things from other people’s perspective more. It’s made me not sweat the small stuff as much. And it’s made me realize how I would help someone else going through this.
On your social media accounts, right now the first thing in your bio is “survivor.” Why was it important for you to put that right up front?
Without that, I wouldn’t have all the other stuff that comes after it. I wouldn’t be an entertainment anchor on a weekday morning show, I wouldn’t be a dog mom. I wouldn’t be all the other titles. My health is now the first and most important thing in my life. Your health is your wealth.
Is there anything you wish you knew when you were first diagnosed?
Being a blood cancer survivor, I won’t be able to donate blood, no matter how many years I’m in remission. I had a few blood transfusions. They’re so vital to help you after chemo, and I won’t be able to return the favor.
It broke my heart when I found out. So I made it my mission to get the word out about how important blood donations are, on social media and on the air. If I can get people to donate blood on my behalf, that means a lot to me. Because blood saves lives.
Required*