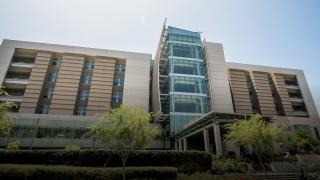 By
City of Hope
Hematologic Malignancies
Physician News
City of Hope’s dedication to innovative research and groundbreaking advancements in the field of cancer over our 100-year history has resulted in measurable outcomes for our patients. With one of the largest research and treatment centers for hematological malignancies in the country, we’re able to provide world-class care while continuously making stem cell transplant and leading-edge research advancements in order to bring lifesaving therapies to patients.
Although it’s considered to be a relatively rare cancer, multiple myeloma (MM) remains the second most commonly diagnosed blood cancer. The mission of our Judy Bernard Briskin Center for Multiple Myeloma Research, which sees one of the highest volumes of MM patients in Southern California, has been to aggressively pursue innovative research and develop state-of-the-art treatments in order to find a cure for MM. Our superior MM survival outcomes, both regional and national, speak to the level of excellence City of Hope brings to patients who receive cancer treatment with us.

Across all ages, the median survival for patients with MM was 9.2 years for City of Hope and 3.7 years for SEER Los Angeles. When looking at age stratified patient groups (<60, 60-<70 and ≥70 years of age), the survival probabilities of City of Hope compared to those of SEER LA at three and five years postdiagnosis showed:
This illustrates the magnitude of difference in the level of care City of Hope is providing to MM patients in comparison to average outcomes for the Los Angeles region.

More about SEER and CNeXT Comparison

Our analyses were conducted using data from City of Hope’s Cancer Registry (CNeXT) and the National Cancer Institute’s Surveillance, Epidemiology and End Results (SEER) Program November 2018 Disease-specific data files. You can find more information about the SEER Program and our impressive multiple myeloma outcomes in our full  Multiple Myeloma Outcomes Report .
To begin the referral process for a patient with multiple myeloma call us at 800-826-HOPE or visit CityofHope.org/referral.