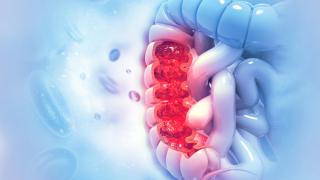 By
Zen Vuong
Research
A Phase 2 clinical trial at City of Hope has shown that monotherapy with sotorasib results in anti-tumor activity and a favorable benefit-risk profile among heavily pretreated patients with advanced colorectal cancer. The research was published Dec. 14 in Lancet Oncology.
Colorectal cancer is the third most common cancer diagnosed in the United States and the second leading cause of cancer death, according to the Centers for Disease Control and Prevention.
The research study focused on a subset of colorectal cancer patients who carry a mutated gene called KRAS G12C, which is estimated to affect about 4% of people with colorectal cancer tumors, said Marwan Fakih, M.D., lead study author and co-director of the Gastrointestinal Cancer Program at City of Hope. KRAS mutations have been linked to worse overall survival in colorectal cancer, partly because they are resistant to targeted therapies that inhibit the EGFR protein, a pathway that enables cancer cell growth.
Marwan Fakih, M.D.
“For this chemotherapy-resistant population, the study results exceeded the historic benefits linked to approved third- and fourth-line therapies for advanced colorectal cancer,” said Fakih, professor in City of Hope’s Department of Medical Oncology & Therapeutics Research and the Judy & Bernard Briskin Distinguished Director of Clinical Research. “This Lancet Oncology study is a proof of principle that targeting KRAS G12C with a small molecule KRAS G12C inhibitor, sotorasib, can lead to tumor shrinkage and meaningful duration of disease control in a patient population that otherwise has very limited treatment options.”
While the response rate in the study did not meet expectations, the ongoing, single-arm Phase 2 CodeBreaK 100 trial showed an objective response rate of 9.7% among the 62 patients enrolled, with six patients achieving a partial response. Disease control (complete response, partial response or stable disease) was achieved in 82% of patients. Median progression-free survival and overall survival were four months and nearly 11 months, respectively.
Patients had received a median of three prior treatment regimens of systemic anti-cancer therapy, with 73% of patients receiving three or more previous lines of treatment prior to participating in this study. Most treatment-related side effects were minor (grade 1-2) and included diarrhea and nausea.
“These data from the Phase 2 CodeBreaK 100 show encouraging clinical activity and a positive benefit-risk profile with sotorasib in advanced colorectal cancer in this heavily pretreated patient population, with the response rate exceeding the current standard-of-care therapies,” said David M. Reese, M.D., executive vice president of Research and Development at Amgen. “Amgen remains deeply committed to bringing new treatment options to colorectal cancer patients who harbor the KRAS G12C mutation, and we believe the path forward is combination therapy, so we look forward to investigating sotorasib in combination with panitumumab in our Phase 3 trial.”
Currently, overall response rate for patients with recurrent metastatic colorectal cancer who take approved options, such as trifluridine and regorafenib, ranges from 1% to 4%, Fakih said. Their estimated median progression-free survival and overall survival range from two to three months and six to nine months, respectively. The CodeBreaK 100 data for this patient population demonstrates better response rate and longer survival than current approved medicines.
“We are now working on potentially improving the efficacy of sotorasib by combining it with panitumumab, therefore resulting in a more complete blockade of the EGFR pathway and improving oncological outcomes. We have recently reported the preliminary results of a sotorasib plus panitumumab combination therapy in KRAS G12C mutated metastatic colorectal cancer, which resulted in an overall response rate of 33% in patients who have never received sotorasib,” said Fakih. “We are looking forward to the launch and completion of a randomized Phase 3 clinical trial to test and potentially confirm the superiority of sotorasib and panitumumab over standard of care and to enable the approval of this combination in this patient population with unmet needs.”
# # #
The ongoing clinical trial can be found on ClinicalTrials.gov.