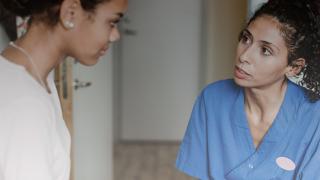 By
Maxine Nunes
Research
One of the most effective treatments for substance abuse is a drug called naltrexone — effective, that is, if you’re white.
If you’re African American, it probably won’t work at all.
It’s a prime example of what happens when clinical trials lack racial diversity, the subject of an essay published Jan. 15 in Cell Press co-authored by Rick Kittles, Ph.D., professor and director of City of Hope’s Division of Health Equities, and his postdoctoral fellow Leanne Burnham, Ph.D.
Rick Kittles, Ph.D.
The paper presents a powerful case for diversity in clinical trials — especially given the importance of genetics in creating a new generation of precision drugs.
“Genetic variation isn’t random, it’s structured according to population history, and that’s why genetic ancestry is so important,” Kittles said. “If you focus on just one population, you’re going to miss a lot of data — and most research has been driven by white men.”
That’s exactly what went wrong with the naltrexone trials. It turns out that the frequency of important functional variants in the OPRM1 gene varies considerably between Europeans and people of West African descent — which prevents the drug from working as effectively in most African Americans.
The problem of diversity in clinical trials impacts many racial groups, though by far the fewest participants are African American.
Why do we have this lack of participation by non-whites? Kittles laid out the multifaceted aspects of the problem and where the solutions lie.

“One reason Blacks, Hispanics and other groups are reluctant to participate in these trials is a lack of trust and the long history behind it,” Kittles said. “Many Black men, for example, think they’ll be used as guinea pigs if they participate in a clinical study.”
He’s referring to a history of betrayal, one that is understandably difficult to overcome.
Perhaps the most notorious example was the Tuskegee Experiment, which was conducted from 1932 to 1972. It was 40-year study of hundreds of low-income African American men with syphilis, who were never told their diagnosis. And the cure, penicillin, was deliberately withheld from them.
Leanne Burnham, Ph.D.
Another part of that dark history was violation of the rights of Henrietta Lacks, a Black cancer patient. In the 1950s, her cells were the first to be cloned for human research — without her knowledge or consent. Known as HeLa cells, they led to the creation of the polio vaccine and are still used in research today. Huge profits were reaped, but not for Lacks or her family, who only learned what happened when the genomic sequence of her cells was published in 2013.
For a long time, Native American women were subject to illegal sterilization, something that did not become public knowledge until the 1970s.
And these issues are not just part of a long-ago past. Currently, a whistleblower complaint alleged that the U.S. Department of Homeland Security performed medical procedures — without consent — on women detained at the border between the U.S. and Mexico.
How can we repair the trust?
“Since City of Hope’s Division of Health Equities was created, we’ve been out in the community, in churches and barber shops, giving talks and cancer screenings — and we’re also listening to what people need,” Kittles said. “It’s changing attitudes — rapidly actually. But there’s still a long way to go.”

Language barriers account for the lack of participation by first-generation immigrants, particular Asian and Hispanic, but City of Hope is actively working to remedy the situation.
“We’ve done a really good job of effectively speaking about and promoting our work to different groups in many different languages, including Spanish, Mandarin, Korean and Vietnamese,” Kittles said.
Cultural barriers can be more challenging.
Research has shown that patients benefit greatly when their doctor belongs to the same ethnic or racial group. A powerful example of this was a study in Oakland, California, which showed that Black men assigned to Black primary care physicians received 34% more preventive services than those assigned to a doctor of a different race, which correlates with a 19% decrease in mortality.
The problem is that Blacks comprise just 5% of active U.S. physicians and Hispanics 5.8%, while 52% are white. The solution begins with education, and efforts like the Expanding Medical Education act proposed by Sen. Tim Kaine are already underway.

Other Obstacles to Diversity

For low-income people — many of whom belong to ethnic minorities — it is not only more difficult to have access to medical care in general, but also to clinical trials.
For one thing, they often lack adequate health insurance, a problem that government is still wrestling with. And economic issues not only include the price of drugs, tests and other trial procedures, but often costs such as transportation, hotels and time off from work.
Among the solutions suggested in Kittles’ paper are stabilizing and standardizing insurance coverage for trial participants, providing financial incentives to patients and locating trial sites within communities.

Looking Toward the Future

In addition to the solutions mentioned above, the push for diversity in clinical trials at City of Hope is an important and ongoing effort.
Recently, co-author Burnham launched a study of hereditary factors in prostate cancer, and its design requires an equal number of African American, Asian and white men.
However, Kittles does not want to minimize the amount of time and effort real change will require.
“It’s not easy to change the health outcomes of communities that have been ignored or marginalized for generations. You can’t turn on a light switch and change it,” Kittles said. “But I do know that as we attack those barriers and remove them, more and more individuals in those communities will see great improvement.”
In the long run, though, the benefits will be enormous.
“As we continue to increase diversity in clinical trials at City of Hope, and the science and technology begin to reflect true diversity,” he said, “just imagine the impact it will have on precision medicine in our communities.”