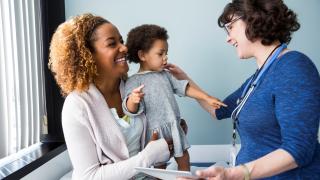 By
Abe Rosenberg
Patient Care
Dmareon Hawkins was 8 years old when he came to City of Hope for acute lymphoblastic leukemia, ultimately receiving a bone transplant from his brother. It was the human element, provided by Child Life Services, that often helped the most

Dmareon Hawkins is a normal, happy, healthy 11-year-old boy living with his parents and three brothers in San Bernardino. He wants to be a scientist when he grows up. He almost didn’t live past his second birthday.

“I’ve been through a lot of things,” he said with grim seriousness.

On a visit to relatives, the then-toddler scooped up and swallowed a diabetes pill he mistook for candy. He quickly fell unconscious, his blood sugar dropping to a dangerously low 25 (100-180 is the normal range).

Doctors saved Dmareon with a massive infusion of glucose. Had he arrived at the emergency room even a bit later, the doctors told his mother, Dmareon would have died.

One such close call is more than any child, parent or family should ever have to endure. But a few years later, Dmareon faced another life threat.

He was 8 years old when he toppled from a playground jungle gym and suffered a concussion. As he slowly healed from that injury, Dmareon began to complain about pain in his elbow. “He would cry out,” his mother Chante Hawkins recalled.

Before long, his legs began to hurt as well. Then the other elbow. And his knee. One ankle appeared out of alignment. Walking became awkward and difficult. “The pain was excruciating,” Chante recalled.

Doctors suggested everything from arthritis to “growing pains” to benign bone tumors. But further tests revealed Dmareon had acute lymphoblastic leukemia, the most common form of leukemia in children, with about 3,000 new cases each year.

“I fell to pieces,” she said. “How did this happen? Did I forget to pray? Did we miss something? Leukemia sounded like such a hopeless word, something old folks got. But an 8-year-old boy? I was feeling all kinds of fear.”

In fact, though leukemia does strike older adults, children make up 60% of all cases. Nevertheless, it is no longer a “hopeless” illness. Survival rates in kids now top 90%. Though Dmareon’s chances were good, he remembers being scared.

“I thought I was going to die,” he said.

Dmareon started chemotherapy right away. Within days, the pain subsided. But as the chemo treatments continued over the next months, Dmareon responded more slowly than expected, and a complete, long-lasting remission seemed unlikely. He would need a bone marrow transplant.

Then, as it has for so many people, COVID-19 got in the way.

Dmareon repeatedly tested positive for the virus, complicating efforts to schedule the transplant. Meanwhile, Dmareon was left in limbo, receiving no treatment. Frustrated by the numerous delays and looking for a second opinion, the family pivoted to City of Hope where, Chante says, the entire tone was different.

“We met Dr. Karras on the first day,” she recalled. “Within a week, Dmareon was getting chemo and radiation” in preparation for the transplant. “The transplant happened in seven days!”

“They came here very worried, very scared. Dmareon hadn’t been treated in a while, and every time they’d tried to schedule the transplant, something had come up.

“We were able to recenter them, settle them down.”

‘She Gave Us Hope’

“Dr. Karras was phenomenal,” Chante said. “She gave us hope. She knew she could help Dmareon, and she was truthful and honest about the process from day one. Now, I felt secure.”

All three of Dmareon’s older brothers qualified as donors for a “haplo” or half-match transplant. Doctors chose DeMarqus, who was closest in age, three years older than Dmareon. Chante says DeMarqus was “a little apprehensive” at first, but ultimately he cared more about helping his little brother.

“He said to me, ‘It’s gonna be all right. We’ll go through this together.’” Dmareon said.

Transplant patients spend many weeks in the hospital, a fraught period that upends normal family life. Chante, a business design consultant, had to put work aside while staying with Dmareon constantly, without neglecting her other children who were home with her husband Antonio, who worked two jobs. As for Dmareon, he had to acclimate to the strange hospital environment, away from everything familiar, including his homeschool activities.

This is where City of Hope’s Child Life Services team and other supportive care professionals made a profound difference.

The family received several grants to help with expenses, such as food, utilities, transportation and more. “They made sure our rent got paid,” said Chante. Dmareon was outfitted with a computer, iPad and other supplies to help him keep up with school, and he was hooked up with the Make-A-Wish organization, which provided toys and video game machines.

But it was the human element that made the biggest impact.

A Child Life Services counselor came by every day to check on Dmareon, play cards and board games with him, talk with him, take walks with him, explain hospital procedures and generally be a constant, reassuring presence.

“The games help with coping skills and also provide a needed distraction,” said Marissa Verdin, M.S., CCLS, the counselor who sees Dmareon now. “We work with our pediatric patients from the moment they come in. We don’t wear scrubs. We’re more like teachers. We build rapport, help kids reach a sense of normalcy and we educate them about all that’s going on around them.”

And they encourage questions.

“Before they go in for a procedure, I try to find out how much they know,” she continued. “I’ll show them an anesthesia mask, some EKG stickers, other things they’re likely to see, so they’re not surprised or scared.”

Having a counselor around also gave Chante the time and space she needed for herself and the rest of her family.

“I didn’t have to be ‘on,’ 24/7,” she said. “She [the counselor] was there to explain things far better than I could, and I knew Dmareon felt comfortable with her.”

Dmareon also spent time with psychologist Jeanelle Folbrecht, Ph.D., clinical professor and chief of the Division of Psychology in the Department of Supportive Care Medicine, who eased his fears and also calmed his separation anxiety whenever Mom wasn’t around. “She helped him understand that his power didn’t come from me, but from inside himself,” Chante said.

Dmareon came through the transplant remarkably well, with few complications except for a brief episode of graft-versus-host disease. In fact, after a year, Dmareon no longer needed immunosuppressant drugs.

As far as his mother is concerned, Dmareon has reached a much more important goal.

“It’s almost like he never had cancer,” she said joyfully. “He’s moving around like he did three years ago!"

Seems Dmareon made an impression on the staff, too.

“They are wonderful people, and Dmareon’s a really cool kid,” said Karras, who continues to see Dmareon as an outpatient. “Everything worked out so well for them. I’m really happy about it.”

Chante’s just happy the family ended up where they did.

“That sharp turn we took to City of Hope was exactly what we needed. City of Hope is a place where hope is inspired. You can rest easy there.”

The Department of Supportive Care Medicine at City of Hope was the first in the United States to fully integrate across supportive care specialties and into the patient’s clinical care, and is one of the largest programs of its kind today. The program provides cancer patients with comprehensive physical, psychological, social and practical support services, including care navigation, survivorship programs, specialists in cancer and aging, Child Life specialists, psychological and spiritual counseling, pain management, integrative medicine, such as yoga, massage and meditation, and more — all with a focus on maximizing patient and family strengths, quality of life and the ability to best engage in their treatment journey and beyond. Thanks to a gift from the Biller Family Foundation, City of Hope is working to expand this offering across its cancer care system and to advocate for establishing supportive care as a standard best practice for cancer care in the United States.