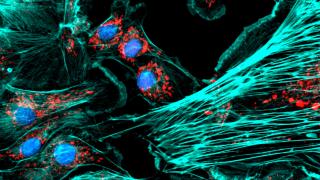 The Mark LaBarge Lab's main research focus is understanding the changes that occur in the mammary gland with age that make it more susceptible to cancer initiation. Through its research, the LaBarge Lab aims to develop a model system for studying aging and cancer in a human solid tissue.

The Mark LaBarge Lab's main research focus is understanding the changes that occur in the mammary gland with age that make it more susceptible to cancer initiation, and to develop a model system for studying aging and cancer in a human solid tissue. We hypothesize that age-dependent microenvironment changes breast cancer susceptibility in humans, to develop new early detection and risk prediction modalities, and molecular targets for cancer prevention.

The breast is an excellent system for studying the effects of aging in a human epithelium. Normal tissue is obtainable as discarded tissue from women across the human lifespan and both stromal and epithelial cell types are culturable as primary cells. We have shown that these primary cultures retain molecular features of age and lineage specificity from in vivo, enable sharing of precious human samples between laboratories, repeated experimentation, and exploration of the functional consequences of chronological age and cancer risk states (such as women who carry germline gene mutations). Through the combined efforts of our team of researchers, clinical research associates, and our clinical and surgical colleagues we have been able to derive hundreds of cultured strains to examine effects of age in a diverse collection of individuals. It is our desire to merge population sciences with cell and stem cell biology to better understand how susceptibility to cancer manifests in human populations rather than in specific individuals.

Women older than 50 years account for more than 75% of new breast cancer diagnoses, and the majority of those tumors are of a luminal subtype. When I began this work in ~2009, people understood that there were gross changes in breast with age, like an increased in adipose and in ER expressing cells, but for the most part normal breast tissue was only used as a control for tumors. We hypothesize that a continuum of age-related microenvironment changes alters the function of mammary stem cells so as to destabilize the healthy epithelial repertoire, and continuously challenge maintenance of normal tissue architecture in a manner disabling the mechanisms that restrain malignant behavior in mutated cells. For example, the breast immune repertoire changes with age to be more immunosenescent and immune suppressive (J Mam Bio & Neo 2021), which we associate with specific cytokines and chemokines that we hypothesize alter the epithelia and stroma. We have established more than 100 strains of primary human mammary epithelial cells (HMECs) that grow as much as 60 population doublings from women ranging in age 16-91 years (Cancer Research 2012), and embody epigenetic states that enables them to regenerate their basement membrane in 3-D culture absent matrigel (iScience 2021). We showed that the effects of chronological aging (distinct from replicative aging) on HMECs could be studied in our primary culture system because it retains the molecular, epigenetic, biochemical and functional footprint of the aging process (Cell Reports 2018, Aging 2017). Using this system in concert with in vivo analysis of human breast tissues, we discovered that differentiation defective multipotent progenitors accumulate with age, giving rise to less of the tumor suppressive MEP, and to undifferentiated LEP. Peri-menopause multipotent progenitors lose sensitivity to microenvironment directives to differentiate due to alterations in the hippo pathway that control YAP and TAZ (Cell Reports 2014). To understand better how aging impacts cancer progression, we are studying the rate-limiting step of immortalization as a function of age, and find that the chronological age of normal HMEC is a determinant of the intrinsic subtype of the immortalized derivatives (Frontiers 2015). Using high dimensional analysis techniques like CyTOF we discovered that aging luminal cells share a molecular signature in common with immortal DCIS-like cells (Cell Reports 2018).  Because these HMEC do not incur any gross genetic changes using our immortalization technique, we hypothesize that age-related epigenetic states underlie subtype etiology. With reconstituted organoid models we have demonstrated that phenotypes of aging in mammary epithelia, including age-related DNA methylation patterns, are transmitted by a cell non-autonomous mechanism (Aging 2017, Sayaman etal bioRxiv 2021). We speculate that this body of work may serve to provide a biological definition of cancer susceptibility.

A robust breast cancer (BC) prevention strategy requires risk assessment biomarkers for early detection and we hypothesize the biomarkers of aging will identify tissue that is susceptible to cancer. We examined a number of “classical” aging biomarkers, such as telomere shortening, and found little evidence that they mark chronological age in human breast (Genome Integrity 2013). We have identified three breast-specific biomarkers of aging that suggest acceleration of aging is a feature of cancer susceptibility. (i) Using microfluidics devices for measuring mechanical properties of cells at single-cell resolution we learned that chronologically older epithelial cells share a mechanical signature that is in common with non-malignant immortal transformed cells (Nature Micro Nano 2018). (ii) We found that expression of ELF5, a transcription factor critical for normal mammary development, is downregulated in mammary luminal epithelia with age (Aging 2017). DNA-methylation of the ELF5 promoter is negatively correlated with expression in an age-dependent manner. ELF5 clock-based estimates of biological age in Average-Risk (AR) mammary epithelia were within 3.5 years of chronological age. Clock-based estimates of biological age of breast epithelia from BRCA1 or BRCA2 mutation carriers, who were high risk for developing BC, suggested they were accelerated 20 years on average relative to chronological age (Can Prev Res 2021). We hypothesize that the changes in ELF5 expression or ELF5-proximal DNA methylation in luminal epithelia are emergent properties of at-risk breast tissue and constitute breast-specific biological clocks. (iii) During aging in the human mammary gland, luminal epithelial cells lose lineage fidelity by expressing markers normally expressed in myoepithelial cells. We showed that histologically normal breast tissue from younger women who harbor a germline mutations in BRCA1, BRCA2, or PALB2 genes, exhibited hallmarks of accelerated aging (Nature Aging 2021). These included proportionately increased luminal epithelial cells that acquired myoepithelial markers, decreased proportions of myoepithelial cells, and a basal differentiation bias or failure of differentiation of cKit+ progenitors. High-risk epithelia are transcriptionally enriched for genes of the opposite lineage, and genes of inflammatory and cancer-related pathways.  These studies suggest a convergent biology of cancer susceptibility, regardless of the specific underlying genetic or age-dependent risk, or the associated breast cancer subtype. Luminal cells are our principle target for cancer prevention because they are the putative cells of origin for age-related luminal breast cancers. By examining carefully the loss of fidelity phenotype in luminal cells with protein mass spectrometry we identified a prospective protein target, PEAK1, that uniquely changes with age (iScience 2021). When we inhibit the PEAK1 pathway pharmacologically we observe age and lineage specific ablation of the luminal cells. We are pursuing a translational strategy that utilizes biomarkers of aging to identify individuals who are susceptible to breast cancer, coupled with targets informed by aging biology to use as cancer prevention agents.

I wanted to examine the concept of epithelial plasticity in human cells to determine whether normal and malignant adult human stem cells were directed by the microenvironment. I worked with Mina Bissell, a pioneer in breast tumor microenvironment and 3-D organotypic culture systems. In her lab I collaborated with Ole Petersen to prospectively isolate normal human mammary stem cells (JCB 2007). A major problem working with normal human epithelial stem cells is that the microenvironments used for testing multipotent activity and self-maintenance are imperfect. Thus understanding the role of specific tissue microenvironment components in stem cell regulation by performing the elegant types of genetic dissections that one can do in model organisms was impossible in humans. Accordingly, I developed the microenvironment microarray platform (MEMA), which enables cell-based functional assays on thousands of defined combinatorial microenvironments. This technology was the main platform for the MEP-LINCs program U54HG008100. I used MEMA to demonstrate the principle that specific microenvironments begot specific differentiated states in human mammary multipotent progenitor cells (Integrative Biology 2009). In an eight year collaboration with Jim Lorens at University of Bergen we examined the role of the AXL receptor tyrosine kinase in normal human and mouse mammary epithelia and showed that its activity is essential for maintaining multipotent progenitors and stem-like states in both organisms, and ablation of AXL prevents tumor formation in the mouse models (iScience 2020). We think AXL is a gate keeper to plasticity programs in epithelia and hypothesize that most cancer cells are capable of functioning as cancer stem cells if the microenvironment is permissive. Indeed, we showed that exposure of breast cancer cells to specific combinations of tumor microenvironment proteins would cause expression of AXL, giving those cells access to stem and EMT-gene programs and increasing their resistance to chemotherapy (Frontiers 2018). This phenomenon of microenvironment modulated plasticity was not limited to breast cancer cells, with MEMA we showed that isogenic breast, prostate, and lung cancer cells exhibited a continuum of unique drug-response phenotypes to lapatinib, which is determined by the elastic modulus and microenvironment composition (Cell Reports 2017).

Mark LaBarge is a professor and stem cell biologist in the Department of Population Sciences at the Beckman Research Institute at City of Hope National Medical Center.

In addition to his scientific pursuits, Dr. LaBarge is Director of the Postdoctoral Training Office at City of Hope, and he is passionate about thoughtful mentorship in STEM and is trained as a facilitator by the Center for the Improvement of Mentored Experiences in Research.

Dr. Miyano is an expert in chromatin organization and molecular biology. His current project explores the roles of age-varied transcription factors in breast for use as biomarkers of cancer risk and potential therapeutic targets.

Ms. Lopez is an expert on primary human mammary epithelial cell culture and she is the backbone of the LaBarge Lab.

Arrianna Zirbes
Ms. Zirbes is a PhD candidate whose dissertation work focuses on the immune milieu as it changes in breast tissue with age, and implications for epithelial-immune cell interaction as a function of age.
Arrianna Zirbes

Ms. Zirbes is a PhD candidate whose dissertation work focuses on the immune milieu as it changes in breast tissue with age, and implications for epithelial-immune cell interaction as a function of age.

Who We Collaborate With

We collaborate with organizations in progressing the development of new treatments in our specialized areas of research.

Invest in changing lives by becoming a partner.

Contribute to our discoveries by donating.