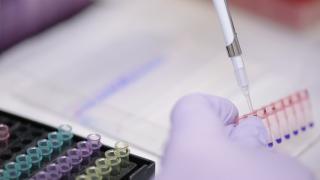 By
Zen Vuong
Research
In a clinical trial that put three targeted drugs to the test, the small molecule inhibitor cabozantinib was found most effective in treating patients with metastatic papillary kidney cancer — findings expected to change medical practice.
There are currently no effective treatments for metastatic papillary kidney cancer, or metastatic pRCC, a rare subtype of kidney cancer. One study of 38 patients found that the average survival rate was eight months after diagnosis.
Sumanta Pal, M.D.
Sumanta Pal, M.D., clinical professor of medical oncology at City of Hope and an investigator at the SWOG Cancer Research Network, a cancer clinical trials group funded by the National Cancer Institute (NCI), said there is hope for metastatic papillary kidney cancer patients. Mutations in the MET gene are a hallmark of this type of cancer, and there are new drugs that target the MET gene, among other important signaling pathways. Pal decided to put three of them to the test against the current standard treatment, sunitinib, a receptor tyrosine inhibitor.
In his study, S1500, Pal studied 147 eligible patients with papillary kidney cancer, most of whom had not received any prior treatment. Patients were randomly assigned to one of four treatment groups: those who took sunitinib, and those who took one of the three MET target drugs: cabozantinib, crizotinib and savolitinib.
Pal and his team wanted to see how long it would take patients’ cancer to spread or return, a measure known as progression-free survival. They found that patients receiving sunitinib went a median of 5.6 months before their cancer progressed; patients receiving savolitinib and crizotinib fared much worse overall. But cabozantinib gave patients a median of 9.2 months before their cancer progressed. In addition, 23% of patients had a significant reduction in the size of their tumor with cabozantinib. In contrast, only 4% of patients saw this kind of tumor response with sunitinib.

“The magnitude of the response was surprising,” Pal said. “We still have a long way to go to help make patients’ lives longer and better, but we do have a new standard treatment for these rare cancer patients. This result is a testament to SWOG and to City of Hope, who have the motivation and expertise needed to successfully conduct rare cancer clinical trials.”
Pal presented his findings at ASCO’s virtual 2021 Genitourinary Cancers Symposium on Feb. 13, 2021, at 1 p.m. ET. The findings were simultaneously published in The Lancet. Pal also discussed the trial in a recent CancerNetwork video.
Building on the momentum of this clinical trial, Pal will co-lead the next pivotal trial in papillary kidney cancer, one with a focus on the potential synergy between targeted treatments like cabozantinib and immune therapy. Pal will lead that study with SWOG investigator Benjamin Maughan, M.D., Pharm.D., at Huntsman Cancer Institute at the University of Utah.
SWOG 1500, also called PAPMET, was sponsored by NCI, designed and led by the SWOG Cancer Research Network under the leadership of Pal, and conducted through the NCI’s National Clinical Trials Network.
Required*