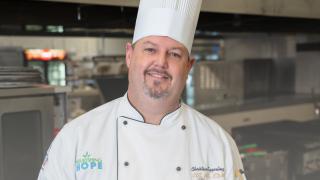 By
Abe Rosenberg
Patient Care
Christian Eggerling can write his own ticket. Or menu, if you will.
Maestro in the kitchen, guru of all things healthful and organic, a culinary prodigy and the 13th chef in his family, Eggerling grew up around farms and food factories, became a sous chef at age 18 and executive chef at 24. He’d be a prime hiring target for the poshest restaurants, the most prestigious hotels or any Fortune 500 company.
So what on Earth is Chef Christian (that’s what everybody calls him) doing at City of Hope?
Living his dream, it turns out, though it wasn’t always obvious.
“If you’d asked me when I was 25 or 30 and working in 5-star establishments if I’d ever work in a hospital,” he says, “I’d have said, well, that’s when I retire!”
He is City of Hope’s director of culinary operations, and if you watch him plow through a typical day — which usually starts at 4 a.m. — you'll know immediately: This is no retirement gig. Way more than a chef, he is the food CEO, responsible for everything edible on campus, from the trays brought to patients’ bedsides to the point-of-sale snacks and meals at the onsite cafes, bistros and pantries catering to staff and visitors. He runs it all, and he’s changed most of it.
Arriving in 2017 from the consulting company that supplied City of Hope’s food service, Eggerling was confronted with the challenge of how to get the most nutritious meals to patients at a time when they need it the most — but when they may not feel like eating or have digestive issues as side effects of treatment.
“Everything changes when you're unfortunately going through cancer,” he explained. “Your body now is completely flipped upside down. It's not agreeing with what you're trying to do to it to get it healthy again.
Mindful of patients’ diverse backgrounds, needs and tastes, he created 36 specialized diets — everything from allergy-sensitive fare to vegan dishes to ethnic specialties. Patients from China, Japan, Korea, India, Ethiopia, Sudan or Armenia can find familiar comfort foods now. So can Hispanic patients, who may prefer “a simple bowl of rice with beans,” or Midwestern folks looking for chicken a la king. All are made with low sodium, low sugar, a minimum of processed ingredients and lots of fresh, plant-based components.
Eggerling’s own education in healthful nutrition started early, at home. He grew up with his grandparents, who owned food businesses that specialized in healthy items. “My grandfather sold the rights to distribute muesli to General Mills,” he said. He learned about agriculture watching his mom and dad operate a Merino sheep farm, as well as a company called Farm Products Inc.
After culinary school, his big break came when a Washington, D.C., restaurant facing bankruptcy needed an executive chef who could keep the place afloat. The owners took a chance on the 20-something Eggerling, but warned him, “Our livelihood depends on you.” Message received. The restaurant returned to solvency three years ahead of schedule. Eggerling’s tenure was a crash course in the business side of food prep and made him a rare triple threat chef/manager who understands food arts, nutrition and the bottom line. To say nothing about his considerable people skills.
“He’s just sensational at every level,” said Steven T. Rosen, M.D., City of Hope’s provost and chief scientific officer, who admits to having “a passion for nutrition.” Rosen, the Irell & Manella Cancer Center Director's Distinguished Chair, has pushed hard for City of Hope to play a greater role in meeting patients’ nutritional needs, seeing it as a key component in disease prevention.
“He’s a natural fit — such a personable, lovely human being,” echoed Nancy Clifton-Hawkins, M.P.H., senior manager of community benefit. Clifton-Hawkins oversees a broad array of outreach efforts at City of Hope, including a portfolio of health, nutrition and lifestyle-based programs made possible by a grant from the Conrad N. Hilton Foundation. That’s how Eggerling acquired his newest role: master teacher and video star of City of Hope’s Savoring Hope cooking classes.

Using funding from the Hilton Foundation, every other Wednesday afternoon Eggerling holds forth from a special Nourishing Hope kitchen where he serves up easy-to-prepare, mouth-watering healthy recipes. Whether it’s low-fat mango and papaya salsa, chicken tortilla soup or an energizing herb risotto, Eggerling makes the process simple and fun. And that’s just the first part. Once he’s done, a nutrition expert (usually Susan Nyanzi, Dr.P.H.) goes through the recipe ingredient by ingredient, pulling out the major nutritional elements and explaining their importance.
Originally conducted in person for a small audience of City of Hope employees, the classes moved online because of COVID-19 and now reach a larger audience, including community members and cancer patients and their caregivers. Not surprisingly, the videos are getting raves.
“Chef Christian is helping people think of hospital food in a positive way,” said Christopher Walker, a City of Hope research associate and self-proclaimed foodie. “I’m learning all these new techniques and cooking skills, like how spices bloom or the right way to cut a watermelon,” he continued. “The knowledge he imparts is so unique.”
Veterans of other, more conventional cooking shows feel the same way.
“He showed us a healthy way to make Thanksgiving turkey with sausage stuffing,” said Marguerite Lockwood, a City of Hope senior administrative support professional. “I made it for my husband’s company Christmas event. We served 100 people, and they loved it!”
Eggerling loves doing the classes and wouldn’t mind doing more. He has several ideas “percolating,” like a “chef’s box” takeout service for the soon-to-be-built patient hotel on campus, or perhaps a cookbook highlighting salt- and sugar-free recipes that you’ll actually want to eat. Stay tuned.
For now, Eggerling is delighted to be exactly where he is.
“I never would have guessed it at first,” he said, “but everything that came before has led me to this.
“I really did find my needle in a haystack.”