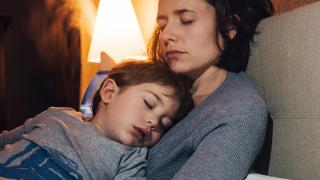 By
Maxine Nunes
Research
Canavan disease may be classified as rare, but it is nonetheless devastating when you’re a parent who’s just been told your baby has it.
Yanhong Shi, Ph.D., director of the Division of Stem Cell Biology Research
The disease, which is generally diagnosed in infants between 3 and 6 months of age, causes a spongy degeneration of the brain’s white matter, leading to severe motor dysfunction, blindness, seizures and death within the child’s first decade.
There has been no way to treat it, no hope for a cure — but thanks to new cell-based technology, a breakthrough treatment for Canavan disease is now being developed at City of Hope.
The study is led by principal investigator Yanhong Shi, Ph.D., director of the Division of Stem Cell Biology Research and the Herbert Horvitz Professor in Neuroscience. Its early translational phases was supported by California Institute for Regenerative Medicine, and it has just been awarded a five-year, $7.8 million dollar grant from the National Institutes of Health (NIH).
“This cell/gene-based therapy has the potential to change the course of this devastating disease,” said NIH scientific officer, Chris H. Boshoff, Ph.D.

The promise of a cure for Canavan disease lies in the recent development of induced pluripotent stem cell (iPSC) technology, which is called hiPSC when human cells are used.
Like embryonic stem cells, iPSCs can differentiate to become almost any specific type of cell — but no embryos are involved, so there are no ethical concerns about its use. The cells that can be reprogrammed into iPSCs can be easily taken from skin or blood. Then, in the laboratory, the faulty gene is corrected, converted into relevant tissue type-specific cells, and infused back into the patient.
Another advantage is that iPSCs can be used as an autologous treatment — one derived from the patient’s own cells — so there will be no immune reaction or need for long-term immunosuppressant medications to avoid rejection.
“We were really impressed by the great potential the iPSC technology brings to stem cell biology,” Shi said. “We thought that if we could find a disease that is caused by a single gene mutation with one primary cell effect, then we would have a chance to rescue that mutation by developing hiPSCs into the cell type that was destroyed by the mutation.”
Canavan disease was an ideal model for this new technology.
It’s caused by a single mutation in the ASPA gene, a key factor in maintaining the integrity of the brain’s white matter. The gene is coded for the production of aspartoacylase, an enzyme that breaks down an amino acid called N-acetyl-aspartate (NAA), which becomes toxic when accumulated. The Canavan disease mutation hampers ASPA activity, creating an accumulation of NAA that causes the brain to degenerate.
“Because iPSCs are very easy to manipulate genetically, the idea was that by introducing a functional ASPA gene into a Canavan disease patient through iPSC-derived brain cells, the excess NAA could be removed from the brain to help it heal,” Shi explained.
In theory, it seemed ideal — but what would happen when they began testing it?

Impressive Preliminary Studies and the Path to Clinical Trials

In an earlier study, Shi and her colleagues transplanted iPSC-derived cells with a functional ASPA gene into the brains of mice afflicted with Canavan disease. The results were impressive. NAA levels were significantly reduced, reversing white matter degeneration and improving motor function.
What’s more, the effects were long lasting. After one treatment, a reservoir of the injected ASPA cells remained and continued to maintain healthy brains in the mice.
A safety study was performed next, and they found no increased cell proliferation or any other evidence to suggest tumorigenesis, the transformation of normal cells into cancer cells.
Based on this remarkably encouraging study, the NIH grant will fund the next five years of research.
The research team will now conduct definitive studies for efficacy and safety before applying for FDA approval of an investigational new drug. Once that approval is received — possibly as soon as two years from now — human clinical trials can begin.
Shi, whose youthful passion for science began as a need to fulfill her curiosity, is now also driven by a personal desire to help people. She thinks often of the woman who approached her after she had received her first award to study Canavan disease.
“This mother was so excited about the study and desperate to have her child take part in a trial, but we had only just begun our research,” Shi said. “I was so touched by this, and I hope we can move this forward for her and others in the same situation.”

The Future of iPSC Technology

Canavan disease may be rare, but success in this study will pave the way for far more.
“Development of autologous iPSC-based therapy for Canavan disease has important implications for other neurological disorders,” said Boshoff. “This study will provide a proof-of-principal for the use of genetically modified hiPSC-based cell products as cell therapies for this and other genetic diseases.”
The work is very much a team effort and Shi stressed the importance of crediting her co-investigators at City of Hope. They are Neal Prakash, M.D., Ph.D., chief of Neurology; Behnam Badie, M.D., chief of Neurosurgery and The Heritage Provider Network Professor in Gene Therapy; John Zaia, M.D., director of the Center for Gene Therapy and the Aaron D. Miller and Edith Miller Chair for Gene Theray; and Joseph Gold, Ph.D., manufacturing director, and David Hsu, Ph.D., director of the Center for Biomedicine and Genetics. Other key team members at City of Hope include Jianfei Chao, Ph.D., and Lizhao Feng, Ph.D., who led the laboratory research; radiologist Beth Chen, M.D., Ph.D.; pediatric neuropsychologist Natalie Kelly, Ph.D.; and biostaticians Jianying Zhang, Ph.D., and Joycelynne Palmer, Ph.D., director of Biostatistics. A consultant to the project is Reuben Matalon, M.D., Ph.D., of the University of Texas, who first identified the gene involved in Canavan disease
This pioneering research could pave the way for a true revolution in medical treatment.
“We are at the dawn of a new technology that may someday be used for all devastating diseases that have no cure,” said Shi.