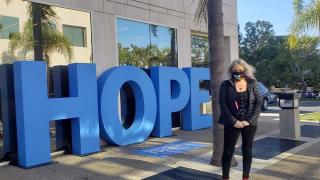 By
City Of Hope Orange County

When Elizabeth “Beth” Coombs learned she had colon cancer after a trip to the ER, her emotions ran the gamut. But after seeking a second opinion at City of Hope Newport Beach Fashion Island, she was filled with hope by the personalized approach to cancer care she discovered there.
“The staff greeted me with kindness and by name, so I had a warm feeling as soon as I walked in the door,” the Laguna Hills resident said. “My oncologist, Misagh Karimi, M.D., listened to me, answered every question I had and explained the treatment plan to me. I was still overwhelmed, so I don’t remember much more from that first visit except that I left feeling hopeful and cared for.”
Also Read: Helpful Questions To Ask Your Oncologist
Giving and receiving
Coombs knows a thing or two about the importance of compassionate care. The New Yorker moved to Southern California to be with her family. She took care of her grandmother until her grandmother passed away and has been caring for her aging parents.
“In the past two years, it seems we’ve dealt with all of the kinds of health issues that impact families with aging parents: falls, injuries, dementia, and more,” she said. There is nothing she would trade for the opportunity to be there for them, she said. “My dad is now living in a care facility, and I’m key to his emotional support. I make sure he has new clothes, his audiobooks, and for sure his peanut butter M&Ms.”
At City of Hope Newport Beach Fashion Island, Coombs said she gets cancer care that is “beyond individualized. I never feel like a number there.” That sentiment encompasses everything, from the easy-to-use electronic messaging system and appointment set-up process to the attentive, personalized clinic visits.
“Dr. Karimi relates to me as a person, not just a patient. The first thing he asks is if I’ve had any changes in how I feel,” Coombs said. “He’s even suggested foods for me to eat, and how my vitamin supplements would be affected by chemotherapy.”
Dr. Karimi referred Coombs to City of Hope’s Duarte campus after infusion treatment shrank her tumors. Even though the providers who first diagnosed Coombs’s cancer had told her she wasn’t a candidate for surgery, the City of Hope specialist determined it was viable and successfully removed six tumors in April 2021.
Post-surgery, Coombs joined two City of Hope clinical trials, which she sees as an opportunity to benefit both her own life and the lives of future cancer patients. One study focuses on genetic testing. The other is a pre- and post-surgical study in which Coombs wears a fitness tracking device.
“If I don’t get at least a couple thousand steps a day, a nurse calls me to check in,” Coombs says with a chuckle. “I’ll admit I’ve missed two days of exercise, and if the nurse wasn’t following up with me, I’d probably only have exercised for two days instead of just missing two days. The study, I think, is one of the main factors that helped me to heal so quickly.”
Surrounded by support
Coombs has made it through, she says, with the help of family and friends, the knowledge she’s gained from her support groups, and what she calls her New York sense of humor. Of the fitness tracker on her ankle, Coombs said, “The neighbors think I’m on house arrest, which I find quite hilarious, and I don’t refute it.”
She is currently finishing adjuvant or “cleanup” chemotherapy to eliminate any remaining cancer cells in her body. “I was originally told when I was diagnosed that there was no hope, and now here I am on cleanup chemo.”
Coombs feels the same reassurance at City of Hope Newport Beach Fashion Island that she wants her parents to feel, she said. “Knowing that Dr. Karimi, the nurses, and everyone who works there are focused 100 percent on cancer and helping patients overcome the challenges they are facing has been priceless. It’s like a new day.”
Hope is growing at City of Hope Orange County. Our new locations in Huntington Beach, Newport Beach Lido and Irvine Sand Canyon join City of Hope Newport Beach Fashion Island to form a four-location network of highly specialized cancer care. To make an appointment at any of our four Orange County locations, click here or call: