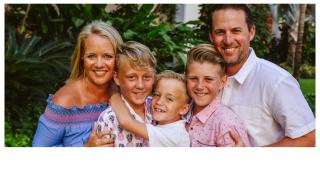 By
City Of Hope Orange County
Allie Bertocchini, like most busy moms, didn’t have time for breast cancer. Her life was full. She was raising her three boys, working as a marketing consultant for her husband’s financial advisory firm, serving as president of the school parent-teacher organization, and playing on the club tennis team in her Coto de Caza neighborhood. But as someone with an extensive family history of cancer, Bertocchini knew it was important to carve out time to care for herself.
That’s why, when Bertocchini noticed a change in one of her breasts in 2019, she visited her family physician even though she had a clear mammogram just a few months before. The doctor ordered a diagnostic mammogram and ultrasound, which detected breast cancer.
Bertocchini urges all women to use the same vigilance when it comes to their breast health.
“I would tell anyone that if they ever notice anything that doesn't seem right or a little bit different about their body to get it checked out right away,” Bertocchini said. “If I would have waited until the following year for my next mammogram, I probably would be in a very different spot.”
A different level of highly specialized cancer care
Bertocchini also advocates for women to seek out highly specialized and personalized cancer care like the kind she has received from City of Hope.
“The moment that I got there, it was like I could breathe again, because I could tell there were experts in charge who would help me make fully informed decisions. There was an amazing level of communication,” she said.
Also read: Bestselling Author And “Awesome Mom” Claps Back At Breast Cancer
“It’s so reassuring to receive cancer care from physicians who focus only on cancer,” Bertocchini said. Before going to City of Hope, I was referred to an outside surgeon for my double mastectomy, and I learned he also did a range of general surgeries, like appendectomies. But with my City of Hope breast surgeon, mastectomies are all she does, and it makes a difference.”
After her surgery at City of Hope’s Duarte campus, Bertocchini transferred her cancer care closer to home when City of Hope Newport Beach Fashion Island opened in 2020. There, she sees medical oncologist and breast cancer specialist Wade Smith, M.D. every few months to monitor her progress.
“He and his team have always been available to answer any questions,” Bertocchini said. “Everyone is knowledgeable and empathetic.”
She’s grateful that other women in Orange County who are facing breast cancer have access to the NCI-designated comprehensive cancer center’s research and advanced therapies.
“I remember when I first went up to the Duarte campus for consultation. I saw that we’re all impacted by cancer,” Bertocchini said. “There were people of all ages, and there were translators for patients speaking many different languages. People from all over the world were coming for City of Hope’s exceptional care. I’m overjoyed that now the same level of care is available right here in Orange County.”

Support and gratitude
The encouragement Bertocchini has received from her City of Hope team, her family and her community means everything to her. She said she received a “flood of support” after her diagnosis.
“I got so much help whenever I needed it; a friend made lunches for my kids every day for six weeks,” she said.
Now, Bertocchini is the one offering advice and support. She talks every week with women newly diagnosed with cancer and offers them the same helping hand she received.
In October 2021, she served on the organizing committee for a breast cancer awareness event at the Coto de Caza Golf & Racquet Club. Dr. Smith and members of the Fashion Island care team attended.
“It was inspiring and impactful to hear the speakers who shared their cancer stories. One woman said she was told she wouldn’t survive, but here she is many years later, and she said it’s because of her doctors at City of Hope,” Bertocchini said.
She also is doing her part to give back to City of Hope — Bertocchini participates in research groups that focus on breast cancer and younger women in their 30s and 40s.
“If City of Hope asks me to do anything, I automatically would say yes,” Bertocchini said. “I will do anything to help them heal people and find cures.”
Visit CityofHope.org/OC to learn more. To make an appointment at any of our four Orange County locations, click here or call: